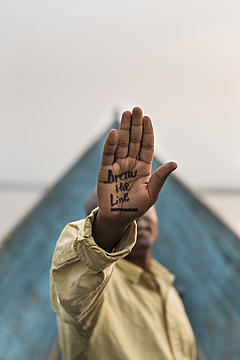 Kinshasa, 11 June 2014- Soco International PLC will end its operations in Africa’s oldest national park and also is committing to remain out of all other UNESCO World Heritage Sites, the London-listed oil multinational is expected to announce today.

“Today is a victory for our planet and for good practices in business. This success is the work of government officials, activists within DRC and supporters worldwide who joined together to help remove the most immediate threat to Virunga,” said Marco Lambertini, Director General of WWF International. “Now is the time for the DRC government to reaffirm its conviction that Virunga has outstanding universal value for all humanity by cancelling all oil concessions overlapping the park as requested by UNESCO.”

In October 2013, WWF filed a complaint against Soco under the Organisation for Economic Co-operation and Development’s Guidelines for Multinational Enterprises. The company’s commitment comes following mediation between the two parties as part of this process.

Soco will withdraw from Virunga after concluding its current operational activities, which include seismic testing in Lake Edward. The company pledges not to drill for oil in the park, which WWF warns could lead to severe environmental damage.

“If free from the threat of oil, Virunga can be a continuing source of hope for the people of DRC. As in other African countries, with proper investment, this park can become a leading economic driver for its communities,” said Raymond Lumbuenamo, Country Director of WWF-DRC. “This is the moment for the international community to support DRC and help us bring lasting change that will ensure Africa’s first national park remains the mother park of Africa.”

Virunga is host to invaluable biodiversity and rare animals such as the legendary and critically endangered mountain gorillas. Additionally, over 50,000 families depend on the park’s Lake Edward for jobs, food and drinking water. In an independent report commissioned by WWF, researchers found that the park could grow in value to over US$400 million annually through activities such as ecotourism and fisheries.

WWF believes today’s commitment sends a message that World Heritage Sites and other fragile natural areas must be protected and the organization will continue to fight for these places.

“For the 750,000 individuals that joined this effort, and the millions more who empower the work of WWF and its partners we have a clear message: thank you for your invaluable support and stay close to us; our work is not done,” said Lambertini. “We have more to do in Virunga and we must now expand this effort to work with governments and businesses around the globe to remove the increasing pressures that put these World Heritage Sites in danger.”

Later this month governments will gather in Doha, Qatar for the annual meeting of the UNESCO World Heritage Committee to discuss the conservation status of Virunga, the Great Barrier Reef in Australia, the Selous Game Reserve in Tanzania, Doñana National Park in Spain, and other sites of concern.

Images of Virunga National Park for media use can be found here : https://photos.panda.org/gpn/external?albumId=4503.

WWF is one of the world's largest and most respected independent conservation organizations, with over 5 million supporters and a global network active in over 100 countries. WWF's mission is to stop the degradation of the Earth's natural environment and to build a future in which humans live in harmony with nature, by conserving the world's biological diversity, ensuring that the use of renewable natural resources is sustainable, and promoting the reduction of pollution and wasteful consumption.