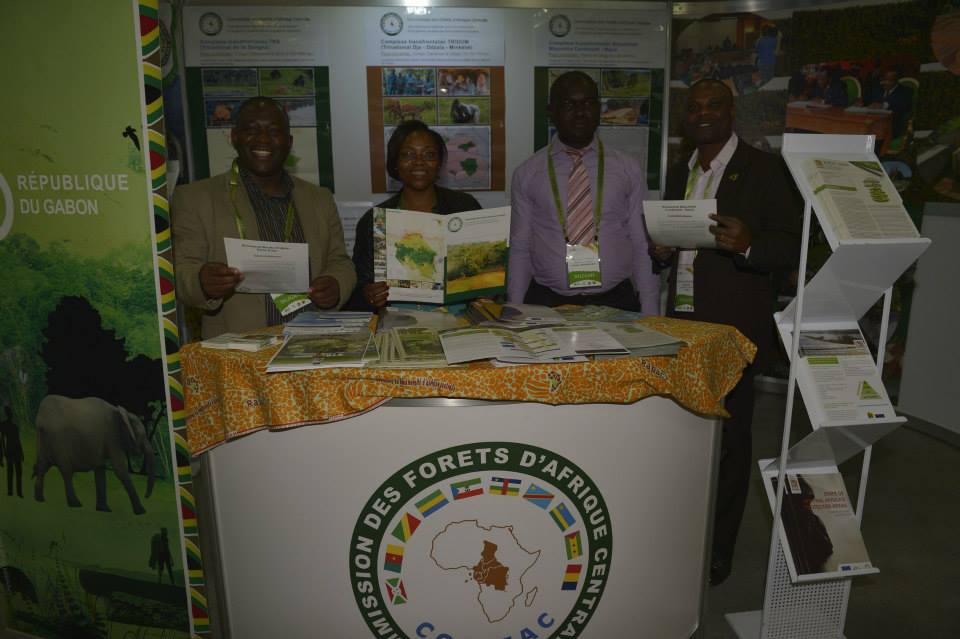 "Living in harmony with nature", with a vision for 2050. That by then, "biodiversity is valued, conserved, restored and wisely used, ensuring maintenance of services provided by ecosystems, by sustaining a healthy planet and delivering benefits essential for all people "- New "general framework on biodiversity not only for the conventions on biodiversity, but for the United Nations system as a whole ... " 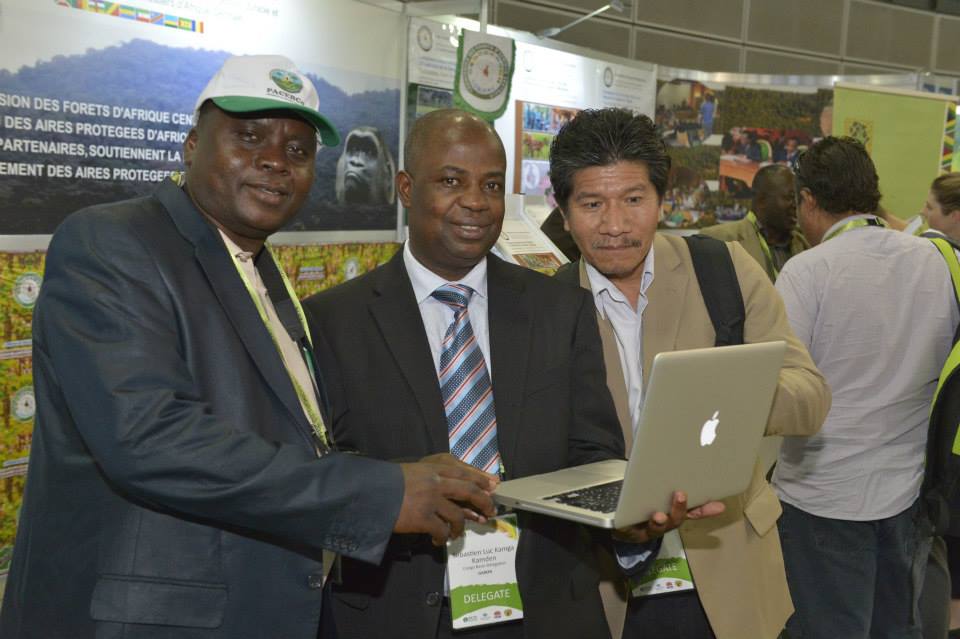 Strong mobilization to support implementation of the Aichi targets

• reduce at least by half, or where possible close to zero, the rate of loss of natural habitats, including forests;

• establish a biodiversity conservation target for 17% of terrestrial and inland waters and 10% of coastal and marine areas;

• Governments further pledged to restore at least 15% of degraded areas and will make a special effort to reduce pressures on coral reefs.

As part of implementation of the Aichi targets, protected areas have grown exponentially in recent decades, now taking up more than 14% of the earth’s surface and having expanded from a few thousand to over 200,000 hectares presently. They occupy 12% of the 300 million hectares of forest making up the Congo Basin. Central Africa is thus on track to achieve the global goal adopted by the Convention on Biological Diversity in 2010: ensuring that at least 17% of land and 10% of the oceans are part of the global network of protected areas by 2020. 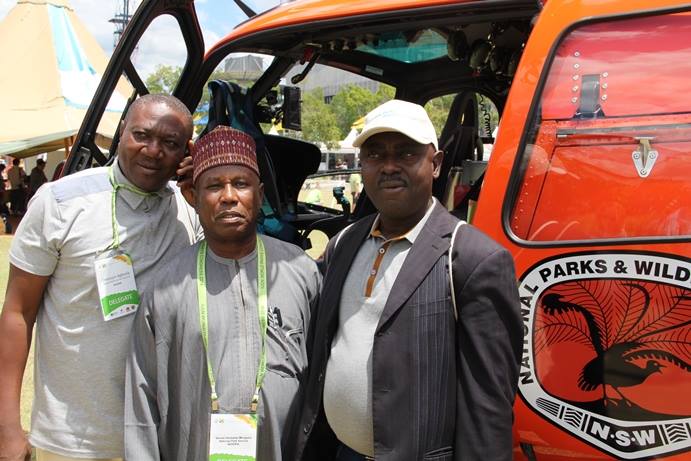 The 6th edition of the World Parks Congress organized by IUCN Sydney (Australia) from November 12 to 19, 2014 aimed to reaffirm and highlight the value of the contribution of protected areas to the conservation of biodiversity, climate change adaptation, the health and well-being of people, governance of territories and to meet development challenges more comprehensively.
Close to 6000 participants gathered around the theme: Parks, the planet and us: solutions, sources of inspiration. Three strategic priorities guided the Conference: (1) maintain and better value nature through parks (2) find 'natural' solutions to respond to global changes affecting the planet; (3) and establish fair and effective governance of the services nature provides to us. 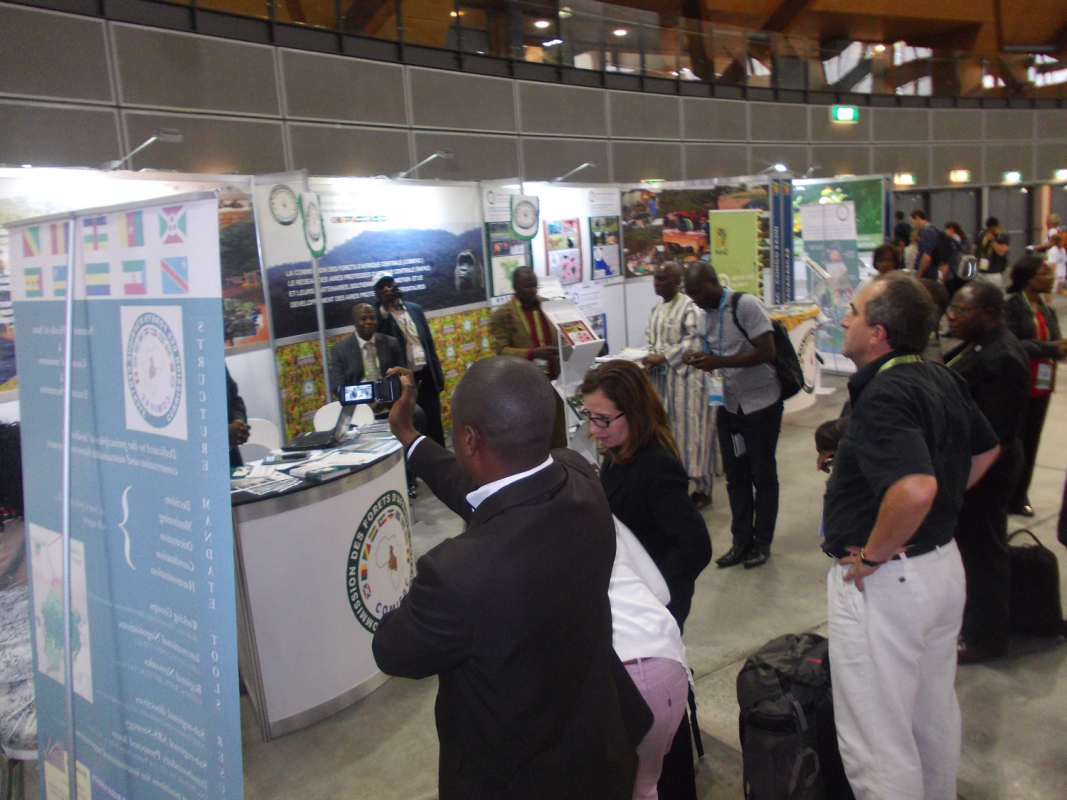 At the World Parks Congress, H.E. Mr. Ali Bongo Ondimba, President of the Republic of Gabon voiced Gabon’s intent to create a marine park system in which no commercial fishing would be allowed. Sustainable management of ocean territory, which is at the heart of the Blue Gabon sanctuary, deserves as much attention as the vast green forests. The Gabonese President announced the delimitation of marine parks which raises the surface area of protected ocean territory occupied by territorial waters and EEZ from 1% to 23%. The decision falls squarely in line with recommendations made by marine biologists for the maintenance of biodiversity. “Within this network”, the conference host says, “no commercial fishing will be allowed. It includes a 27,000 square kilometer extension of the Mayumba National Park, running to the border of our exclusive economic zone.” “To this end, it would be needful to strike a  delicate balance” he added, continuing his speech, "The rest of the exclusive economic zone, will be divided into community and commercial fisheries and oil  exclusion zones where industrial fishing will not be allowed near strategic economic infrastructure. We have already taken steps to eliminate illegal fishing in our waters. We are currently planning to extend these measures to our exclusive economic zone. "He highlighted other achievements such as the climate plan, the fight against poaching, the creation of a department of sustainable development in each ministry, the establishment of a national land allocation plan, the launch of Gabon Blue, the Elephant Protection Initiative - and most recently the "South Climate Initiative" scheduled for March 2015 – which all demonstrate commitment at the highest levels. As he concluded his remarks, he recalled the urgent need to "support the men and women who dedicate their lives to protecting our parks" in order to achieve the international biodiversity protection targets and "preserve the planet’s integrity." 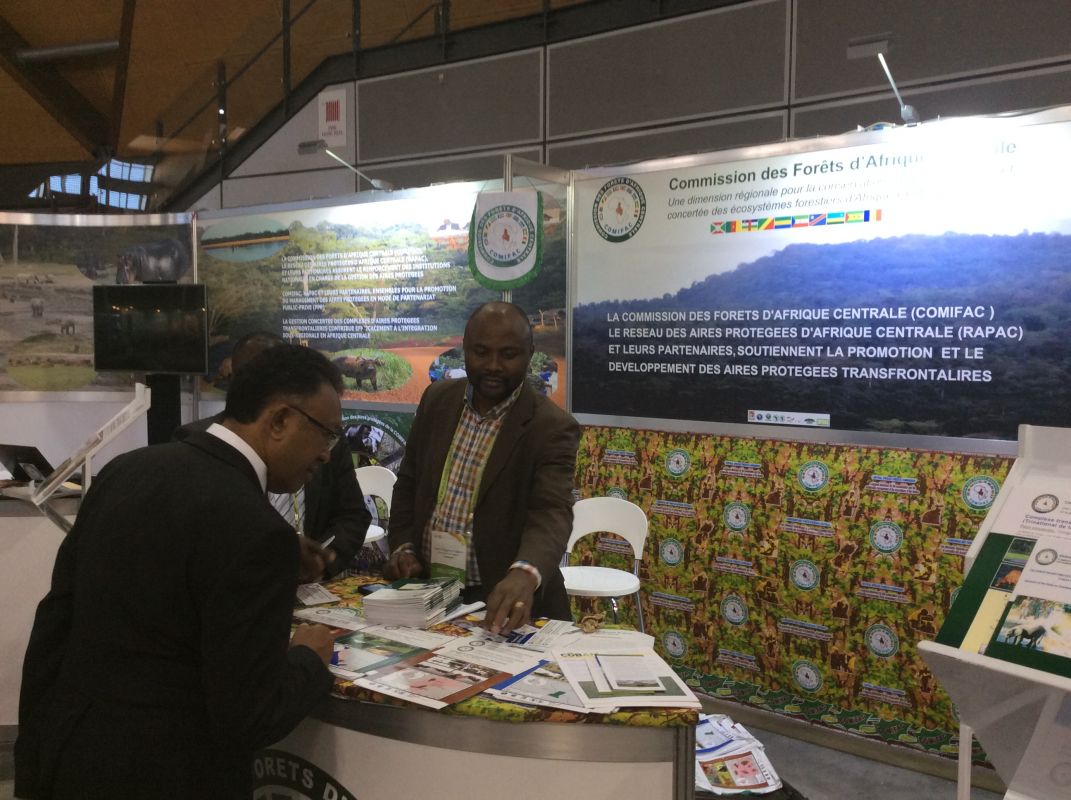 A meeting point for partners and representatives of Congo Basin countries in attendance at WPC, the "Pavilion" was nested right at the entrance of the Exhibition Center of the World Parks Congress. Thanks to the quality of its products, the Pavilion proved to be a major attraction for WPC attendees who included VIPs such as French Ambassador Delegate for the Environment, Xavier Sticker, H.E. Mr Henri Djombo, Minister of Forest Economy and Sustainable Development of Congo, H.E. Mr Hery Rajaonarimampianina, President of the Republic of Madagascar. The event equally provided the COMIFAC Facilitation an opportunity to raise the profile of Central Africa.

The "Pavilion’s" flagship product which captured the attention of Congo Basin attendees was the Congo Basin’s track record in the field of transboundary protected areas. In this connection, the participants were treated to a presentation of 7 transboundary protected areas and a summary guide to the establishment of these protected areas was distributed to participants in French and English. Furthermore, RAPAC introduced a document reporting on the state of protected areas in Central Africa as well as a host of products churned out by RAPAC. In addition, several CBFP partners used this forum to raise awareness of their own side events.

Congo Basin working toward stronger participation in the World Forestry Congress and the World Conservation Congress - Preparation time is now ...

At the end of the meeting, the next date to look forward to was September 2015 at the World Forestry Congress to be held for the first time in Africa. This 14th edition of the World Forestry Congress hosted by the Republic of South Africa which will hold from September 7 to 11, 2015 will gather the global forestry community to review and analyze key issues and share ways of addressing them... To learn more about the Forestry Congress, visit http://www.fao.org/forestry/wfc/en/. Also upcoming is the World Conservation Congress to be held in Hawaii in 2016. Held every four years, the Congress brings together leaders from government, the public sector, non-governmental organizations, business, UN agencies and indigenous and local organizations to discuss and decide on solutions to address the world’s major environment and development challenges. "Following a rigorous evaluation process and a careful review of two exceptional proposals from Hawaii and Turkey, we are very pleased to announce that Hawaii will host the next IUCN World Conservation Congress" says Julia Marton-Lefèvre, IUCN Director General. "I am confident that Hawaii, with its cutting edge facilities, rich biological diversity, vibrant indigenous culture, "Aloha Spirit "and strong commitment to conservation and sustainable development, will provide a unique setting for our 2016 Congress." Learn more about this Congress ...