Conclusions from the "State of the Forests 2008" validation workshop

Florence Palla (RAPAC) has edited a well-informed article resuming the conclusions of the « State of the Forests 2008 » validation workshop in Kinshasa in November 2008, based on the final address delivered by Philippe MAYAUX - JRC/ISPRA.

Three days of work were structured by presentations and working group discussions on issues that allowed participants to fully embrace the data collection, approval and dissemination process, while the plenary sessions further enhanced the discussion on the legal aspects linked to the use of data in the upcoming publication. Experts highlighted the legal framework concerning OFAC’s politics on the exchange and use of data, and put particular emphasis on the signing of individual licensing contracts named « Creative  Commons » (CC) that will lead to a sort of open source mechanism between OFAC and data providers.

Debate sessions on the form, content and the relative frequency of the reports put forward that further editions should be published in 2010 and 2012, followed by a regular update every four years in order to keep track of  changes in the forest cover and to include new issues of priority. A series of potentially interesting issues had already been identified during the workshop’s opening session on Thursday, 20th november when  participants had voted on several suggestions in order to establish an internal « issue ranking «. The outcome placed the assessment of protected areas (aires protégées) and the Landscape approach on top of the list, followed by two other newly emerging issues, the informal timber wood sector and social conflicts linked to natural resource access rights. 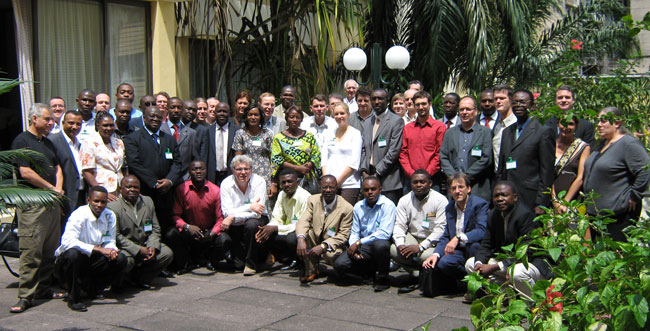 Discussions on the establishment of an Observatory for the Forests of Central Africa, and its possible institutional framework, lead to two complementing conclusions: On the one hand, participants stressed the uttter importance of bringing the OFAC closer to COMIFAC, which would finally allow to sign a common agreement between the two institutions. On the other hand, it was recommended that the observatory should keep its independence concerning the content (collection of consistent and valid data) amd that its legal status should be defined by the middle of 2009 in order to ensure its operational functioning.

Finally, participants called for further contributions from partners in terms of human resources, financing and data satellite retrieving systems.  They agreed that the utlimate objective should be «to turn OFAC into a reference observatory for biodiversity, forest use, informations on forest use and forest cover that could be useful for any kind of political decision-making ».