20th Session of the Conference of the Parties (COP 20) to the UNFCCC : draft texts pending ... 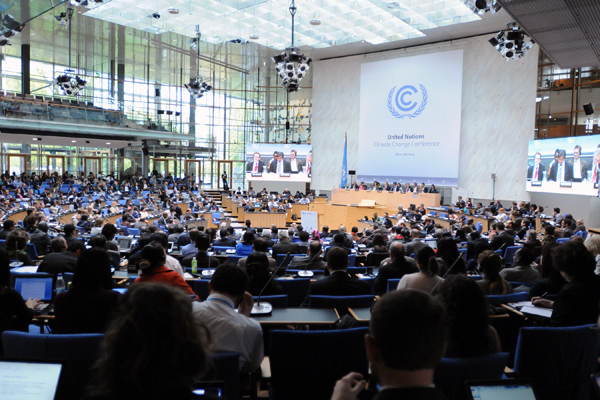 The sixth part of the second session of the Ad Hoc Working Group on the Durban Platform for Enhanced Action (ADP 2-6) of the United Nations Framework Convention on Climate Change (UNFCCC) was held in Bonn, Germany, from October 20 to 25, 2014, aimed at elaborating key documents to be submitted at the 20th session of the Conference of Parties (COP 20) to the UNFCCC scheduled to hold in Lima, Peru, December 2014. Achieving the meeting objective entailed a study of the findings of the contact group that dealt with ADP workstreams 1 and 2, respectively on the 2015 Agreement and the pre-2020 ambition.

At the end of the six-day meeting, the countries came up with the elements of a draft negotiating text that will serve as a platform for the final version of the 2015 agreement and considered an " officious document "on the viewpoints and proposals of the parties regarding elements to be included in the draft negotiating text (ADP.2014.6.NonPaper). In addition, they worked on a draft decision encompassing the type of data that countries would be expected to provide in their communications on intentional nationally determined contributions (CIDNs) and how these contributions will be potentially considered (ADP.2014.7 .NonPaper).

Also as part of workstream 2 on the pre-2020 ambition, the technical expert meetings (TEMs) focused on: opportunities for action on non carbon dioxide greenhouse gases (GHG); carbon capture, use and storage and a follow-up to the TEMs on harnessing emerging mitigation opportunities through energy efficiency, renewable energies, improving the urban environment and land use during the pre- 2020 period. At the end of their deliberations, the countries also discussed a draft decision on the pre-2020 ambition, prepared by the co-chairs before the meeting (APD.2014.8. DraftText).

Based on the findings of deliberations on the two workstreams, the co-chairs developed a set of draft texts for submission at the 20th session of the Conference of the Parties (COP 20) to the UNFCCC.

It is with these draft texts that the delegates separated with great satisfaction and in hope of seeing the draft texts adopted at COP 20 of the UNFCCC.

For more information on the conduct of the sixth part of the second session of the Ad Hoc Working Group on the Durban Platform for Enhanced Action (ADP 2-6) of the United Nations Framework Convention on Climate Change (UNFCCC), please consult the meeting report by clicking on the following link: http://www.iisd.ca/climate/adp/adp2-6/