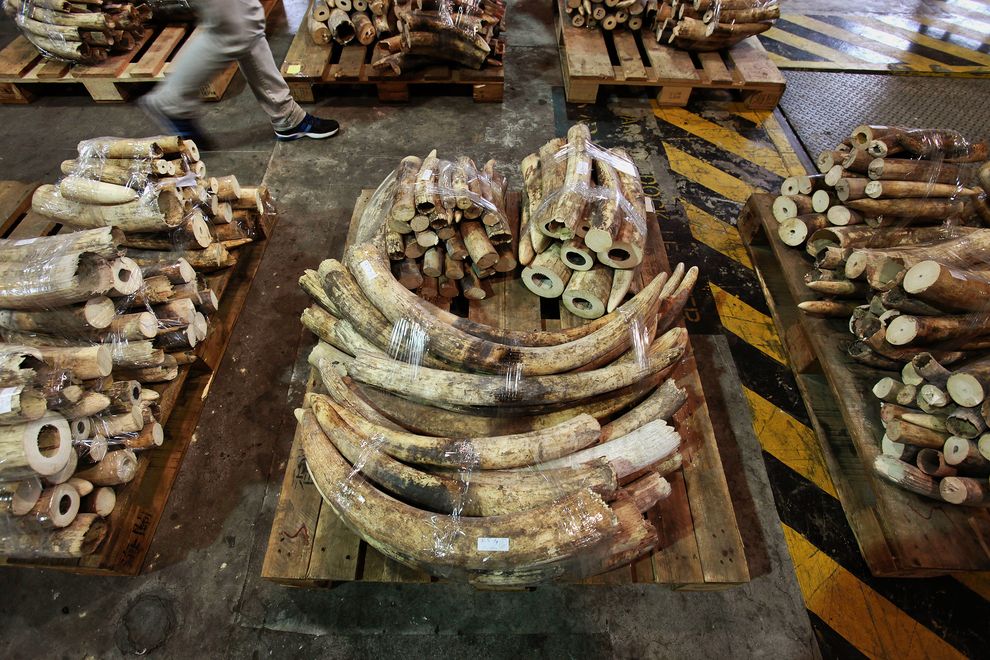 Poaching levels remain alarmingly high at over 20,000. More large ivory seizures in Africa than Asia for the first time -

Geneva - Over 20,000 African elephants were poached across the continent in 2013 according to a report released on Friday by the Secretariat of the Convention on International Trade in Endangered Species of Wild Fauna and Flora (CITES). Although the sharp upward trend in illegal elephant killing observed since the mid-2000s, which had peaked in 2011, is levelling off, poaching levels remain alarmingly high and continue to far exceed the natural elephant population growth rates, resulting in a further decline in elephant populations across Africa.

The report also shows a clear increase in the number of large seizures of ivory (shipments over 500 kg) made in 2013, before the ivory left the African continent. For the first time, the number of such seizures made in Africa exceeded those made in Asia. Just three African countries - Kenya, Tanzania and Uganda - accounted for 80% of those seizures. Large-scale ivory seizures are indicative of transnational organized crime being involved in the illicit ivory trade.

"Africa's elephants continue to face an immediate threat to their survival from high-levels of poaching for their ivory and with over 20,000 elephants illegally killed last year the situation remains dire. Due to the collective efforts of so many, we also see some encouraging signals, but experience shows that poaching trends can shift dramatically and quickly, especially when transnational organized crime is involved," said John E. Scanlon, Secretary-General of CITES.

Overall poaching numbers were lower in 2013 than in 2012 and 2011 - but they continue to exceed 20,000. The report warns that poaching levels will lead to continuing declines in the African elephant population.

The report identifies monitored sites where poaching is increasing (33% of monitored sites), including Dzanga Sangha (Central African Republic), as well as those sites where a decline in poaching has been observed (46%), such as Zakouma National Park (Chad). Some populations of elephants continue to face an immediate threat of local extinction.

The report containing the latest figures (2013) from the CITES Monitoring Illegal Killing in Elephants (MIKE) programme and the Elephant Trade Information System (ETIS) will be discussed at the 65th meeting of the CITES Standing Committee taking place in Geneva from 7 to 11 July 2014.

The monitoring data from the field is unique and it is the most comprehensive global survey of any of the 35,000 CITES-listed species. It is collected by law enforcement patrols and other means, who try to establish the cause of death and other details, every time a carcass is found. CITES then collates and analyses this data thanks to funds provided by the European Union.

Commenting on the scope of the report, Julian Blanc, responsible for the MIKE programme, said: "We are monitoring 30 to 40% of the elephant population, through a peer reviewed process that gives us the best available global estimates on the illegal killing of elephants. We hope to expand this coverage to improve on our estimates. We are supporting countries that do not have the capacity or the funds to monitor MIKE sites and are seeking further support for field rangers."

In March 2013, based on the findings of ETIS, CITES identified eight countries (Kenya, Tanzania, Uganda, China, Malaysia, The Philippines, Thailand, and Viet Nam) as the most heavily implicated in the illegal ivory trade chain as source, transit or destination countries. CITES took decisions at that time requesting all eight countries to develop and implement National Ivory Action Plans to tackle the elephant poaching and smuggling crisis.

These decisions are being translated into a wide-range of actions and initiatives - improved protection in the field, stronger Customs controls, better use of modern technologies and forensics - such as DNA testing and isotopes, strengthened legislation and policies, targeted investigations and more prosecutions, new public awareness campaigns, the destruction of confiscated ivory stockpiles, and the allocation of dedicated funding to combat wildlife crime.

"We are seeing better law enforcement and demand-reduction efforts across multiple countries, as well as greater political and public attention to this unfolding crisis and CITES decisions and compliance processes underpin the global effort" said Scanlon.

"The momentum generated over the past three years must now translate into deeper and stronger efforts to fight these crimes on the front line, where it is needed most - from the field, to Customs, to illicit markets, and only then can we hope to reverse the devastating poaching trends of the past decade" added Scanlon.

Several conferences held since CITES Parties met in 2013, including in Gaborone, London and New York, have further contributed to securing high-level political support across all continents.

The Committee will also consider the roll out of a wide-range of enforcement-related decisions taken by CITES in March 2013 on other species being pressured by illegal trade, including rhinos, Asian big cats, rosewood, pangolins, freshwater turtles and tortoises, great apes, and snakes, as well as a study of the legal and illegal trade in wild cheetahs.

For more Information, please consult the Official website of UNEP: