Johannesburg, South Africa, 8th December 2015—  During the 6th Forum for China-Africa Cooperation (FOCAC) In the framework of a major boost to global efforts to tackle Africa's poaching crisis, China has agreed with African nations to jointly scale up their response to wildlife crime

WWF welcomes this major announcement, which was detailed in the official FOCAC Declaration and Action Plan, but remains concerned that sustainability is not being integrated into the ambitious developmental plans announced for the African continent.

TRAFFIC: "This collaborative pledge is in reaction to previously unseen levels of poaching and wildlife trafficking and to the growing recognition of the impact of wildlife crime on broader issues such as rule of law, national security, rural livelihoods and economic development.

“Trade of wildlife resources from Africa to China has been growing tremendously over the past decade and illegal wildlife trade has also increased and is becoming a growing international concern,” said Roland Melisch, TRAFFIC’s Senior Programme Director for Africa and Europe. “It is encouraging to see this public commitment from both sides to address this issue, which has profound impacts on many sections of society,” he added.

TRAFFIC also acknowledged the commitment made by China to gradually scale up its assistance to African countries pertaining to wildlife and environmental protection and towards related capacity building in the wildlife sector, and towards co-operation on sustainable forest management and in the fields of science, technology and knowledge sharing. Mutual commitments were also aired to enhance collaboration on border facilities and intelligence gathering to undermine the responsible wildlife crime syndicates.

Melisch continued: “It is also very promising to see assurances made towards enhanced co-operation in the media sector. Targetted messaging in African States is needed to engage with Chinese citizens living and working in or visiting Africa as part of public outreach efforts aimed at raising awareness about the implications of illegal wildlife trade.”

The Johannesburg Action Plan was issued following the Second FOCAC Summit, which took place last week and was preceded by the 6th Ministerial Conference of FOCAC. 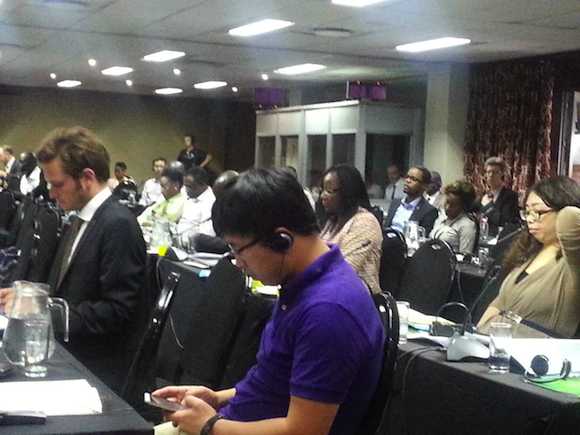 The meetings took place against a backdrop of deepening co-operation between Africa and China, the contient’s largest trading partner.

At the previous FOCAC Ministerial Conference in Beijing in 2012, environmental degradation was recognized as a major global threat, with commitments made for increased social responsibility of Chinese companies operating in Africa and sustainable forest management.

It is the first time trade in wildlife has been dealt with specifically at the level of FOCAC. FOCAC was formally established at the Ministerial Conference of the Forum on China-Africa Cooperation in Beijing in 2000.

Prior to the FOCAC Ministerial Conference and Summit, WWF organized a pre-conference session on FOCAC: Opportunities and challenges to creating sustainable development pathways where TRAFFIC led a panel session on Wildlife Trade: Addressing co-operation on wildlife trade between Africa and China. The event was chaired by Marie Parramon-Gurney of IUCN, with a panel comprising Julie Thomson and Zhou Fei (from TRAFFIC offices in Africa and China respectively), Jo Shaw (Rhino Programme Manager from WWF South Africa) and Julian Rademeyer (analyst with the Global Initiative on Transnational Organised Crime network).

The panel spoke about the risks and opportunities involved in wildlife trade, ranging from the potential for sustainable use of Africa’s wildlife resources that can lead to positive development and growth for trading partners, through to the threat of unsustainable wildlife trade depleting Africa of its natural wealth, and the illegal trade that encourages organized criminal activities that have a detrimental impact on communities and on governments.

African countries and China have recently been at the forefront of ground-breaking high-level initiatives such as the United Nations General Assembly Resolution on “Tackling the Illicit Trafficking in Wildlife” adopted last July and the Conference on Illegal Wildlife Trade held in Kasane, Botswana earlier in March.

During Premier Li Keqiang's State visit to Africa in May 2014, he announced USD10 million in aid for co-operation with African States in wildlife protection. It is currently not clear how much additional funding – if anything – of the USD60 billion pledged by China in December at FOCAC towards smooth implementation of FOCAC initiatives will reach the wildlife conservation sector.

African countries have also recently joined hands as a continent to address the issue. At the International Conference on Illegal Exploitation and Illicit Trade in Wild Fauna and Flora in Africa that took place in Brazzaville, Republic of Congo, in April 2015, African leaders issued a 20-point Declaration urging co-ordinated regional and international action against wildlife crime. Among the recommendations of the “Brazzaville Declaration” was one that FOCAC and other relevant summits include the issue of wildlife crime as a priority agenda item"...

Find out more at:

WWF - China and Africa to ramp up fight against wildlife crime