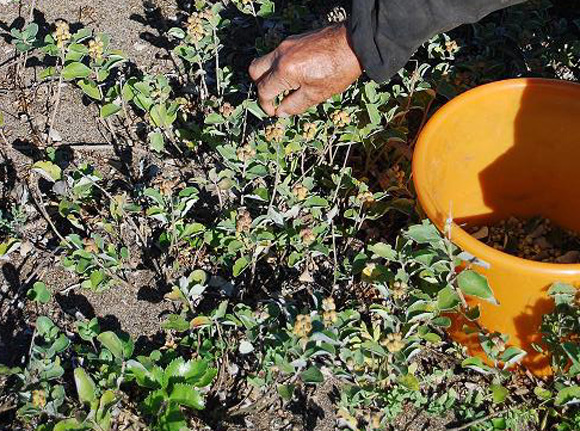 Pyeongchang, Republic of Korea, October 2014—A new Plant Conservation Report 2014, launched at the start of the twelfth Conference of the Parties to the Convention on Biological Diversity (CBD CoP12), which concluded last week in Pyeongchang, Republic of Korea, finds that several of the 16 Aichi Biodiversity Targets on global plant conservation are unlikely to be met by 2020.

The Plant Conservation Report 2014 (PDF) details the value of wild plants both to the global economy and to local communities, and presents an assessment of their conservation status around the world, based on information generated through the mid-term review of the Global Strategy for Plant Conservation (GSPC).

The only GSPC target presently on track to be met is Target 1, which aims to have “an online flora of all known plants” in place by 2020. Although progress is being made towards the other targets, it is generally considered insufficient to meet the deadlines.

The targets, which overall constitute the measurability framework of the GSPC, were originally adopted by the Parties to CBD in 2002 and subsequently updated in 2010.

Published as part of the CBD’s Technical Series, the report forms part of the mid-term review of the Strategic Plan for Biodiversity 2011-2020 and builds on the information gathered for the fourth edition of the Global Biodiversity Outlook.

The findings were featured during a side event hosted by the Botanic Gardens Conservation International (BGCI), CBD Secretariat, TRAFFIC, Korea National Arboretum and the South African National Biodiversity Institute (SANBI).

According to the report, timber is the most significant wild plant product, with wood removals from forests being valued at over USD100 billion annually between 2003 and 2007. Other important wild plant products include fuel wood (valued at USD7 billion in 2005), food, medicine (global exports of medicinal plants were valued at USD2.2 billion in 2012), and raw plant materials for cosmetics.

However, the unregulated and unsustainable exploitation of wild plants is putting severe pressure on populations and is even threatening the survival of some species, with plant diversity under increasing threat from the combined effects of habitat loss, pollution, invasive species and climate change.

Estimates suggest that lack of information on the distribution and conservation status of plants constrains efforts to conserve plants effectively, both in situ and ex situ is hampering conservation efforts, with estimates suggesting at least one in five of all plant species are under threat of extinction. Meanwhile, botanical capacity and funding for plant conservation are decreasing in many parts of the world.

“TRAFFIC’s welcomes the publication of this valuable assessment, but is deeply concerned about the rate of progress towards delivery of a number of the GSPC Targets, in particular those related to in situ conservation and sustainable use of wild plants, which are unlikely to be achieved by 2020,” said Anastasiya Timoshyna, TRAFFIC’s Medicinal Plants Programme Leader.

TRAFFIC tabled an intervention at the CBD, calling upon Parties to scale-up their plant conservation efforts, in particular on identification of areas of importance for plant diversity and for in situ conservation of threatened plant species (GSPC targets 5 and 7, which contribute to Aichi target 11), and their efforts in implementing measures for sustainable sourcing of all wild-harvested plant based products (GSPC Target 12, contributing to Aichi Target 4).

The FairWild Standard was put forward in the Plant Conservation 2014 report as a specific example of best-practice guidance on sustainable harvesting and equitable trade, and how it had been used for guidance within the Traditional Chinese Medicine (TCM) industry in China, through the European Union-China Environmental Governance Programme.

The best-practice standard in sustainable harvesting and trade is being piloted in the project with manufacturers and traders of TCM in Hunan and Zhejiang provinces, as well as establishing a platform for multi-sectoral discussion on improved environmental governance in the TCM sector.

TRAFFIC also highlighted the importance of including the relevant GSPC targets within National Biodiversity Strategies and Action Plans (NBSAPs) and report on progress towards achieving the GSPC targets in their subsequent National Reports.

According to the report, progress is particularly constrained by a lack of recognition of the importance of plants and the insufficient allocation of resources for their effective conservation. The authors call upon governments to engage further with partner organizations to make the best use of available expertise to enhance plant conservation activities at the national and international levels.

Following some debate, the findings of the report were accepted by Parties to the CBD, with several recommendations made including calling for members of the Global Partnership for Plant Conservation and partners to continue supporting capacity-building activities on plant conservation; to facilitate technical and scientific co-operation and promote collaborative research; and to catalyse and promote cross-sectoral linkages among agricultural, health, food and environmental agencies with regard to plant conservation.

Both the sustainable use of wild-harvested products and in situ conservation of wild plants are of extreme importance to the issue of Biodiversity and Human Health discussed during the meeting.

TRAFFIC presented four case-studies, including from work with China’s TCM industry,toillustrate the organization's work in supporting sustainable wild-harvesting and equitable trade in medicinal and aromatic plants:

TRAFFIC’s input on plant conservation and sustainable use at the CBD was supported by the European Union-China Environmental Governance Programme.

For more, please consult the official Website of TRAFFIC. HERE