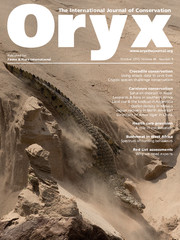 This month, some Central African Red List Authority members, in collaboration with Gabon’s national parks agency, and 8 Gabonese, American, British, and Belgian research and botanical institutions, published a study in the journal Oryx demonstrating how Red List assessments were used to delimit a protected area threatened by urban development. In some cases this results in their downgrading, downsizing or degazetting, or better known as PADDD. The paper describes a case of avoided downsizing of a protected area in the Mondah forest of Gabon, north of Libreville.

Urban development is an increasing threat to the integrity of formerly remote protected areas, in some cases resulting in their downgrading, downsizing or degazetting. One-quarter of previously remote protected areas are now within 17 km of a city and thus face the threat of urbanization. Here we describe a case of avoided downgrading, downsizing and degazetting of a protected area in the Mondah forest of Gabon, north of Libreville. Since its creation in 1934 the Forêt Classée de la Mondah has been downsized regularly, losing 40% of its area over 80 years. During this time the forest surrounding the Forêt Classée was subject to usage for urban and peri-urban needs, including agriculture, sand extraction, collection of medicinal plants, ceremonies, and housing construction. In 2010 the area was threatened with further downsizing. The presence of narrowly endemic plant species in the area was suspected, and mapping and evaluation of these species was proposed in an effort to maintain the protected area boundaries. Botanical field work, including ex situ conservation measures and participant observation in nearby forest communities, was conducted; 24 endemic species, all threatened by urbanization, were evaluated using the criteria for the IUCN Red List of Threatened Species. The borders of the protected area were maintained because of its role in maintaining irreplaceable habitat for threatened species. The area was renamed Raponda Walker Arboretum in 2012.