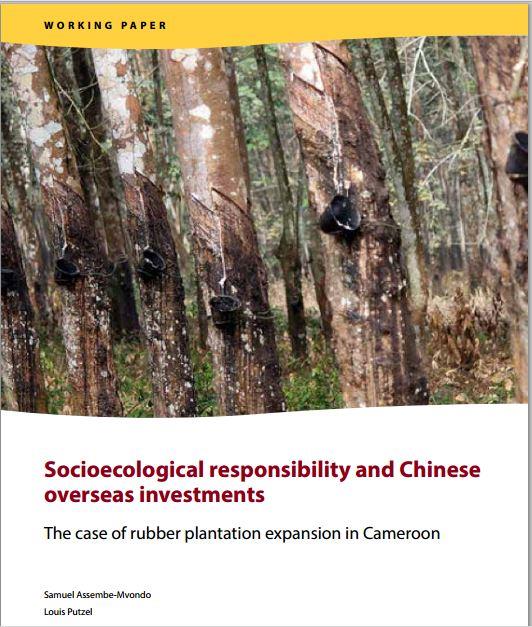 Recently, the investment of emerging economies in African countries has grown rapidly, bringing both new opportunities for ‘South-South’ development and potential social and environmental challenges. Investment from BRICS countries may follow new partnership models that benefit national economies in novel ways. However, investments that require large-scale land concessions may result in negative effects on forest cover and biodiversity, and could also exacerbate conflicting land claims and governance shortcomings. Given the importance to local livelihoods of the ecosystem goods and services associated with forests, the expansion of investments from emerging donors in Africa’s land-based economic sectors needs to be accompanied by new research into its potential impacts.

In particular, Chinese investment in Africa has increased greatly in recent years. In Cameroon, the years following the last global financial crisis saw a boom in Chinese investments in the rubber industry, in particular in rubber estates belonging to two companies: Sud-Cameroun Hevea SA and GMG HEVECAM. These investments come from Sinochem, one of the largest Chinese state-owned multinationals, and involve the rehabilitation of some existing rubber estates, as well as expansion into new areas. Since the initial investment from China, exports of rubber from Cameroon to China increased from almost none to nearly half of total rubber exports in 2011.

We conducted research into the nature and extent of China’s investment in the Cameroonian rubber sector and assessed initial findings through the lens of socially responsible investment (SRI). This included a review of relevant literature and documentary evidence, key informant interviews with company and government officials, and focus group discussions in four villages around each of two rubber estate sites. Data on economic, environmental, social and governance dimensions of these investments were collected and summarized.

The economic policy of the Government of Cameroon has been growth oriented and promotes investment; this policy is supported by a legal framework that provides for tax, customs, financial and administrative incentives in priority sectors, including agro-industries such as rubber. Sinochem’s infusion of funds and expansion plans provide for substantial infrastructural developments, many of which are geared to provide services to an expanded workforce. If realized, these investments are likely to bring significantly more employment to the sector and increase production and export volumes...

For more Information, please download the Document here below: