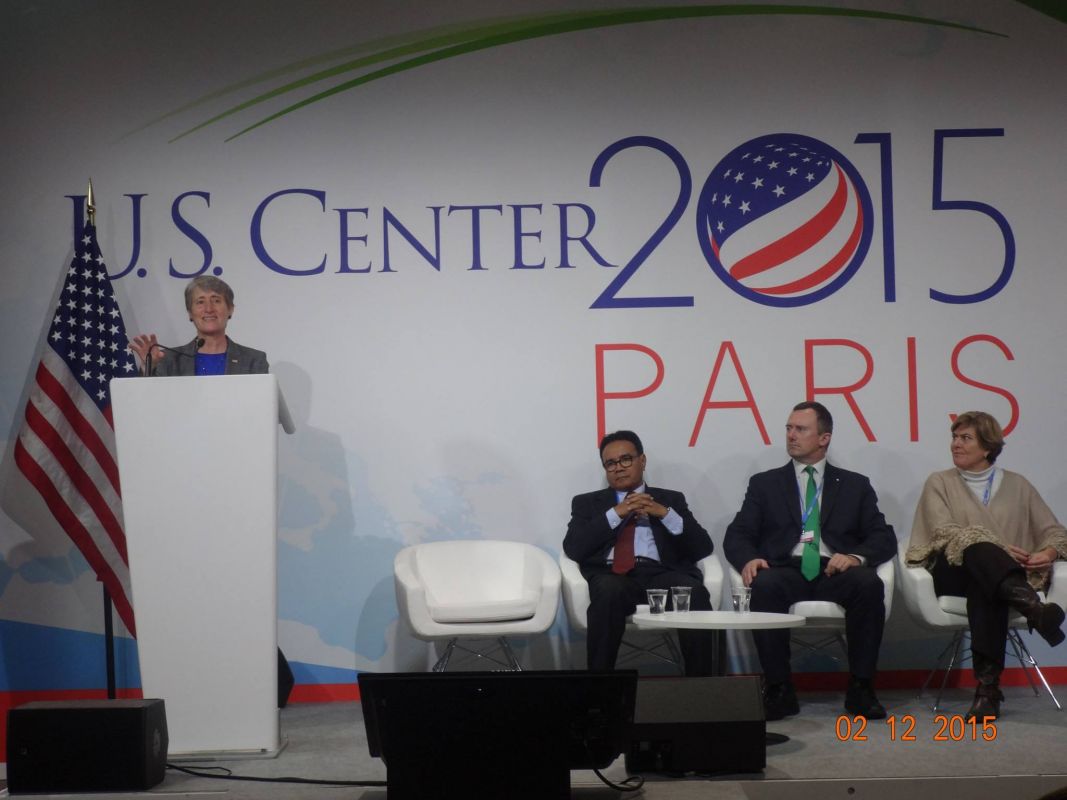 Beyond Forests: Innovative Conservation Solutions at Work in Diverse Landscapes

How do we work with diverse ecosystems and landscapes to address climate change? How can we help these natural systems build resilience and pull more carbon dioxide from the atmosphere?

Globally, the degradation of forests, agricultural areas, wetlands and other important landscapes account for nearly one-quarter of greenhouse gas emissions today. Slowing – and perhaps reversing – these emissions is critical to addressing climate change.

As many of you may know, forests, wetlands, grasslands, deserts, the arctic tundra and even agricultural areas are threatened both by land conversion practices, but also by climate impacts such as wildfire and drought. Improving management to build resilience and foster carbon sequestration and storage in these areas, rather than converting lands and adding to carbon emissions, can directly contribute to the planet’s climate mitigation efforts. While efforts to protect and restore forest ecosystems are certainly the front line in this endeavor, there are many innovative approaches currently underway and showing success in a range of systems including wetlands, coastal mangroves and agricultural areas. 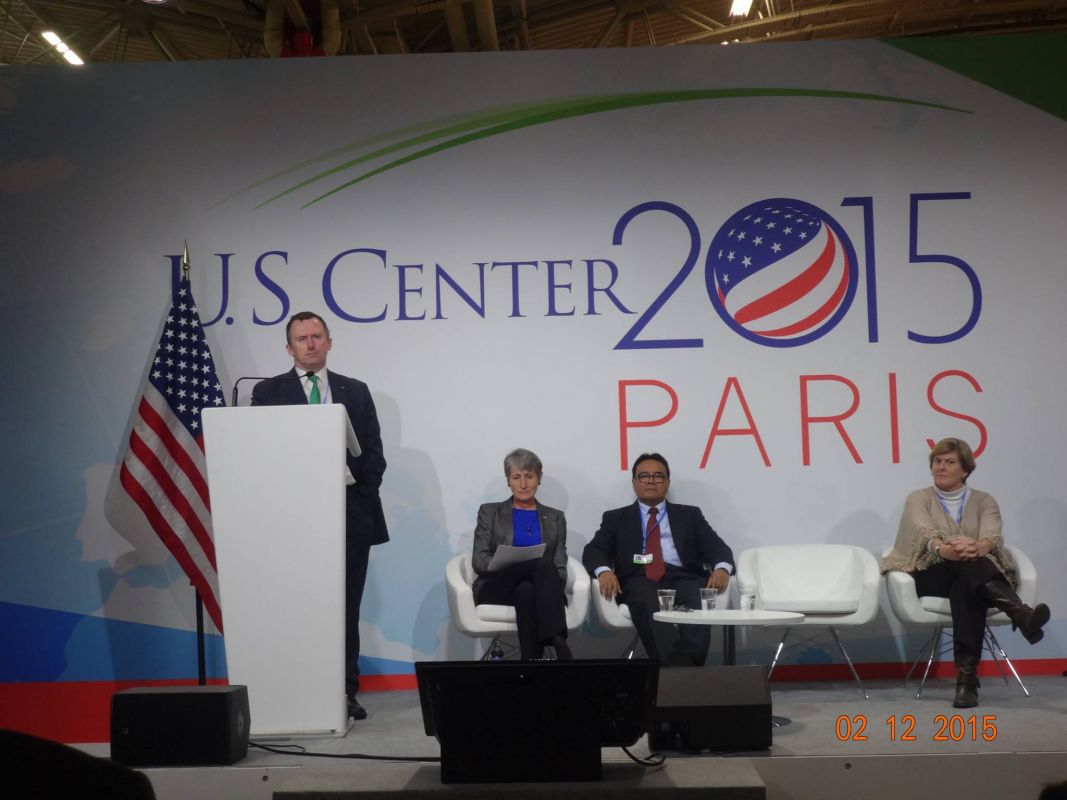 Daniel Murdiyarso, Lee White and Giovanna Valverde Stark joined U.S. Secretary of the Interior Sally Jewell here at the 21st meeting of the Conference of Parties in Paris – known as COP21 – to talk about some of the cutting edge, innovative mitigation actions that are underway in key landscapes around the world.

Murdiyarso is a principal scientist at the Center for International Forestry Research (CIFOR) and co-founder of the Sustainable Wetlands Mitigation and Adaptation Program (SWAMP), a program supported by USAID and the U.S. Forest Service that provides policy makers with science on the role tropical wetlands play in climate change. He says building the resilience of coastal mangroves and other wetland systems in parts of Southeast Asia may be the best hope for global climate change mitigation, and has projects underway in coastal wetlands around the world.

As he explained, these coastal wetland systems are severely threatened by sea level rise, development and aquaculture. In Mozambique, for example, coastal infrastructure development is threatening mangrove ecosystems that have extremely high primary production and store vast amounts of carbon. This is also true in Indonesia, where aquaculture is a severe threat to these productive mangroves and causes a loss of around 1,000 football fields of mangrove forests every year. To facilitate restoration, CIFOR has developed pantropical peatland and wetland maps, assessed the area and volume of peatlands, and measured the effect that sea level rise will have on these systems in the coming decades. He described landscape approaches to restoring and managing these systems that integrate science with local objectives, such as food security and ecotourism.

White, the director of the Gabonese National Parks Service and an advisor to the President of Gabon, focuses on holistic land use planning and management to build resilience, store carbon and foster Gabon’s economic development. He described the vast amounts of carbon stored in the Congo basin and the urgent need to keep it there. In Gabon they have had a great deal of success doing so thus far. Since COP 15 in 2009, they have created a National Climate Plan that integrated low carbon development principles into every sector of the economy. Due to the passage of a sustainable forestry law and creation of the national park system, he calculated that they saved 350 million tons of CO2 by arresting the degradation of ecosystems. They have carefully documented biodiversity in Gabon, mapped out species ranges, and set conservation priorities both within and outside the national parks (where 80 percent of priority species live) that accommodate local needs such as hunting and other traditional uses.

And in Costa Rica, Stark is helping her country remain carbon neutral through its Nationally Appropriate Mitigation Actions (NAMA) program. Costa Rica is a one of the largest producers of coffee, but its coffee cultivation practices have been threatened by climate change and other factors. To continue to make smart, environmentally friendly choices, the country has implemented “low carbon coffee” climate adaption practices, aimed at building resilience and reducing emissions of harmful gasses such as nitrous oxide and methane, while increasing the country’s coffee sector role as a carbon “sink,” or storehouse. NAMA is a whole-of-sector effort.

During the conference, Stark said  their analysis found that 50 percent of emissions from the coffee sector take place in the production process, while the other 50 percent comes from consumption, so to reduce emissions, they engaged the entire coffee sector, including producers, mills, exporters, roasters and consumers. Local coffee growers used “shaded coffee” methods in the field – using trees to improve resilience – while mills used clean technologies to reduce methane emissions.

To ensure success, NAMA used an extensive monitoring, reporting, and verifying process. As a result, it is saving 90,000 tons of CO2 per year, and overall they project to prevent the release of 1.8 million tons of CO2 equivalent into the atmosphere.

Right here in the United States, we’re also taking significant, innovative steps to reduce carbon emissions from our land sectors; steps we hope will enhance the ability of our ecosystems to absorb and store carbon. In her remarks, Secretary Jewell noted the importance of measuring and understanding the carbon that is currently stored in ecosystems and how the U.S. Geological Survey has developed tools to do so. Their Land Carbon Data Tool helps land managers make informed landscape-scale decisions that improve carbon storage in ecosystems around the country.

For more Information, please consult the Full article under the following link:  Beyond Forests: Innovative Conservation Solutions at Work in Diverse Landscapes