Press Release: IPBES forges ahead with its mission to assess the planet’s state of biodiversity and ecosystems 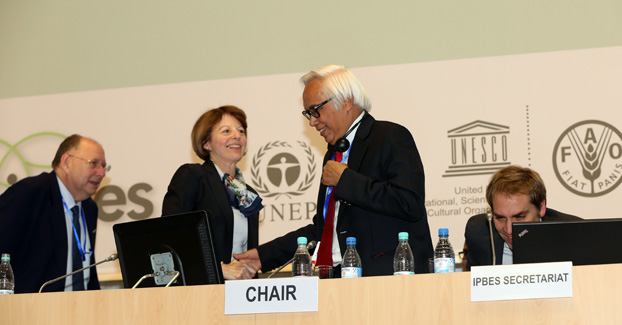 Green light for strategic partnerships and stakeholder engagement, and adoption of a policy addressing conflict of interest -

Bonn, Germany, 19 January, 2015 – The Intergovernmental Platform on Biodiversity and Ecosystem Services (IPBES), which was created to provide policymakers with reliable, independent and credible information on the status of biodiversity, agreed to initiate a set of regional assessments in Africa, the Americas, Asia and the Pacific, and Europe and Central Asia...

Around 700 delegates from over 270 governments, scientific organizations, civil society and the private sector attended the Platform’s third meeting, which was held from 12 to 17 January in Bonn, Germany. IPBES Member States present at the meeting adopted a conflict of interest policy and a stakeholder engagement strategy that will support the implementation of the Platform’s work programme and approved the guidance on strategic partnerships and other collaborative arrangements.

In only one year since the Platform’s work programme was adopted, more than 20 workshops were organized involving the participation of more than 500 experts and seasoned scientists, who have committed their time and energy to the cause of IPBES.

Governments established IPBES in 2012 in response to concerns about the lack of policy-relevant information to tackle threats to biodiversity. The platform’s aim is to enable decision makers to make well-informed decisions that could halt biodiversity loss, and thus promote human wellbeing and sustainable development through the sustainable use of biodiversity.

One of the first two IPBES assessments, to be available as early as December 2015, will look at pollination and food production and it will be accompanied by another assessment on biodiversity scenarios and modelling. The latter will review existing methods to model future changes in biodiversity and ecosystem services as a result of various socio-economic pathways. These two assessments will be the first in a series of ambitious biodiversity assessments that IPBES hopes will inform policy decisions.

Overall, the work of the Platform will require contributions from thousands of scientists from all over the world in the fields of natural and social sciences, as well as the involvement of indigenous people and local communities. They will work together to synthesize, review, assess and critically evaluate relevant knowledge and produce tools in order to support the creation of the best possible policies.

Malaysian Zakri Abdul Hamid, the founding Chair of IPBES, noted that in addition to addressing the needs of relevant multilateral environmental agreements, the Platform aims to improve the dialogue between policymakers and the scientific community on the critical importance of biodiversity and ecosystem services.

To download the Full Release, please consult the following link:   IPBES forges ahead with its mission to assess the planet’s state of biodiversity and ecosystems

Please consult also the following link: ENB: Third session of the Plenary of the Intergovernmental Science-Policy Platform on Biodiversity and Ecosystem Services (IPBES-3)