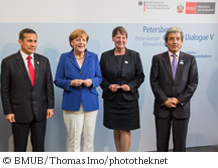 On 14-15 July 2014, about 35 Ministers and their representatives, the Co-Chairs of the ADP, as well as the Executive Secretary of the UNFCCC, met in Berlin at the invitation of the governments of Peru and Germany. In an informal setting Ministers discussed how to accelerate progress in the UN climate negotiations and how to enhance climate action in their respective countries.

At the conclusion of the fifth Petersberg Climate Dialogue, Federal Environment Minister Barbara Hendricks summed up the positive results: "There is a spirit of change in international climate policy. The message of these last few days is that together we can tame climate change. Many countries are working on new, ambitious climate goals for the global agreement we want to adopt in 2015."

At the Climate Change Conference in Warsaw in 2013, countries agreed to present by March 2015 their national climate action contributions to the new agreement that is to enter into force in 2020. Hendricks said she was confident that the major emitters such as the EU, the United States and China would observe this deadline and that many smaller countries would follow suit. "Before the 2015 Climate Change Conference in Paris, we must make sure that the effort is shared equitably and that the actions proposed are sufficient to limit the temperature increase to below two degrees", she said, adding that Germany was well-prepared for this debate.

Hendricks also promised support for developing countries that need technical assistance in drafting their own ambitious climate action plans. "In Germany we have a lot of experience with planning climate action measures and calculating their effects and are happy to share our knowledge," Hendricks explained. Through the International Climate Initiative, the Federal Environment Ministry has given support to 19 countries from all regions of the world in drafting new climate targets as their contribution to the 2015 climate agreement. These countries include Peru, Armenia, Viet Nam, the Gambia and Lebanon. Funding is available to support further countries.

Please consult the Full Article under the following Link:  Conclusion of the fifth Petersberg Climate Dialogue

Please consult also the conclusion of the Co-chairs` conclusions