Libreville: creating a time for debate and discussion

Libreville, 8 May 2009 - After preliminary consultations among his counterparts - the ministers in charge of forests of the Central African countries - Mr Emanuel BIZOT, Minister of Water, Forests, Fisheries and Hunting of the Central African Republic and incumbent president of the Commission des Forêts d'Afrique Centrale (central African forests commission – COMIFAC), called and chaired a consultative meeting of COMIFAC ministers on 8 May 2009 in Libreville, Republic of Gabon. The meeting was attended by Mr Emile DOUMBA, Minister of Forest Economy, Water, Fisheries and Aquaculture of the Republic of Gabon, Mr Henri DJOMBO, Minister of Forest Economy of the Republic of the Congo, Mr Jose ENDUNDO BONONGE, Minister of Environment, Nature Conservation and Tourism of the Democratic Republic of the Congo, and Mr Raymond MBITIKON, Executive Secretary of COMIFAC. Other COMIFAC member countries represented during the meeting were Burundi, Cameroon and Equatorial Guinea. 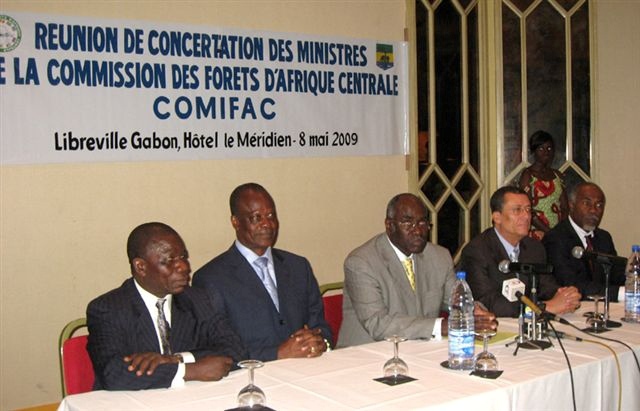 During the plenary session, the ministers and the COMIFAC Executive Secretary, in the presence of the national COMIFAC coordinators and numerous experts from the region, discussed two important subjects that affect most directly the subregion’s countries and forest sector:

(1) According to the COMIFAC president, the current international financial crisis and its impact on the forest sector is indeed reason for concern. The discussion leading to this conclusion was based on a research document analysing the economy  of the forestry and timber sector in the COMIFAC countries, which has been presented by Dr Richard Eba’a from FORAF, the African forests project. The ministers encouraged all the COMIFAC member countries to implement the measures already adopted by the Central African Economic and Monetary Community (CEMAC) and to evaluate their impact on the sector, with a view to ensuring more effective policy monitoring. They also launched an appeal to the international community for aid to lessen the impact of the crisis on logging companies in the subregion.

(2) The subject of the progress of international negotiations on the post-Kyoto climate regime was introduced by Etienne Massard, Director General of Environment and climate focal point for Gabon. Following discussion of the subject, the ministers agreed to become more involved at the policy level, alongside their colleagues responsible for the environment, with a view to providing useful policy guidelines to be followed by negotiators and increasing the weight of COMIFAC in the negotiations.

Institutional issues facing COMIFAC, such as the difficulties in putting the autonomous financing mechanism into operation, were discussed by the ministers during an in-camera session. This worrying problem is now jeopardising the operation of the Secretariat and regional partner institutions, as the majority of member countries have not yet followed up on the decisions adopted in this regard at the recent meetings of the COMIFAC Council of Ministers held in Bangui in September 2008 and in Brazzaville in October 2008, which established that outstanding dues must be paid immediately and that the autonomous financing mechanism, advocated by the Central African heads of state, must be put into operation.

It should be noted that during the opening session of this meeting of COMIFAC ministers, Mr Hans Schipulle, the Congo Basin Forest Partnership (CBFP) facilitator, had already called attention to the question of the autonomous financing mechanism and the expectations of the international community for COMIFAC, a regional forest policy coordinating body, unique in the world. He also reconfirmed the willingness of the partners to continue providing support to the subregion to implement the Yaoundé Declaration. However, the success of these joint efforts and the influence of the region in the context of international post-Kyoto Protocol negotiations will largely depend on the functionality and credibility of COMIFAC. One of the indicators of COMIFAC’s credibility will be the political will of the member countries to ensure that COMIFAC receives the funding it requires to carry out its work.

In their final conclusions, following an illuminating address by the representative of the Economic Community of Central African States (ECCAS), the ministers invited the president-in-office to engage in talks with the General Secretary of ECCAS in order to establish the terms and conditions of COMIFAC funding, which would then be submitted for decision at the next ECCAS Conference of Heads of State and Government. This will ensure that ECCAS is able to provide sufficient funding to finance the operation of COMIFAC and its partner institutions. Until a final decision has been adopted by the heads of state on this subject, the ministers have called on member states to pay outstanding dues and instructed the Executive Secretariat to withhold a percentage of project funding in order to cover management and administration costs.

After recording the proposal of the Democratic Republic of the Congo to organise events to celebrate the tenth anniversary of the Yaoundé Declaration in 2010 in Kinshasa, the ministers brought the meeting to a close, agreeing to meet again as often as required to address problems relating to the conservation and sustainable management of forests in the Congo basin.