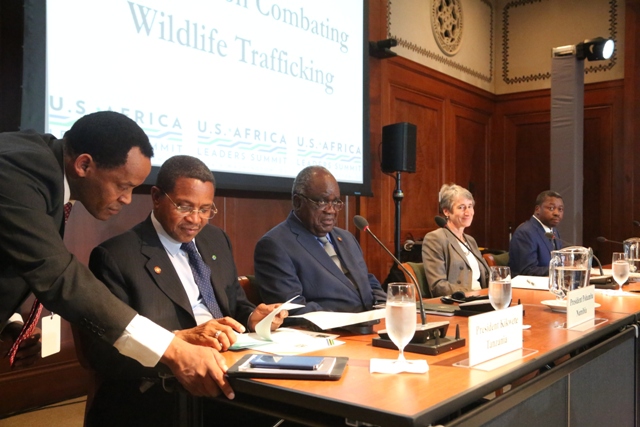 WASHINGTON, D.C. – As part of the historic U.S. Africa Leaders’ Summit, U.S. Secretary of the Interior Sally Jewell, on behalf of the Obama Administration, today hosted four African heads of state including President Hifikepunye Pohamba of the Republic of Namibia, President Faure Gnassingbé of the Togolese Republic, President Jakaya Kikwete of the United Republic of Tanzania and President Ali Bongo Ondimba of the Gabonese Republic in a conversation on combating wildlife trafficking. The conversation also included several other African leaders, senior U.S. government officials from departments and agencies representing the Presidential Task Force on Wildlife Trafficking, members of the federal Advisory Council on Wildlife Trafficking, leaders of key non-governmental organizations and Young African Leaders Initiative participants.

Recognizing that the illegal trade in wildlife is a global challenge that demands a global response, the pu

rpose of today’s session was to build on the progress made since President Obama visited Africa last summer and identify areas where the U.S. and African nations can continue to work together. During the meeting, the four African leaders agreed to work with the United States to strengthen regional and international cooperation. They also discussed efforts within their respective governments to meet this challenge. Because wildlife trafficking undermines economic development, the leaders also addressed the need to engage local communities, including youth, in those joint efforts.

Like other forms of illicit trade, wildlife trafficking undermines security across nations. Well-armed, well-equipped and well-organized networks of criminals, insurgent elements and corrupt officials explore porous borders and weak institutions to profit from trading in poached wildlife. Record high demand for illegally traded wildlife products, coupled with inadequate preventative measures and weak institutions, has resulted in an explosion of illicit trade in wildlife in recent years. That trade is decimating iconic animal populations. Today, because of the actions of poachers, wild populations of species such as elephants and rhinoceroses have declined significantly and face the prospect of extinction across their natural habitat.

To address wildlife trafficking challenges, in February 2014, President Obama issued a National Strategy for Combating Wildlife Trafficking. The Strategy identifies three priorities for stemming illegal trade in wildlife: (1) strengthening domestic and global enforcement; (2) reducing global demand; and (3) building international cooperation and partnerships. In 2014, the United States will invest more than $60 million in support of these efforts. 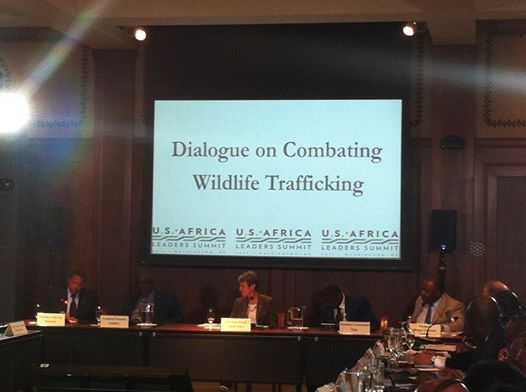 KUAF: African Leaders: No One Country Can Stop Elephant Poaching

As part of the U.S.-Africa Leaders Summit this week in Washington, several presidents gathered on Capitol Hill on Monday for a panel discussion on what needs to be done. Tanzania's president, Jakaya Kikwete, described the considerable efforts his country was taking to provide extra training and resources to game rangers, but said he was hampered by lax security elsewhere in East Africa.

♦ “I do not see the countries and peoples of Africa as a world apart; I see Africa as a fundamental part of our interconnected world – partners with America on behalf of the future we want for all of our children. That partnership must be grounded in mutual responsibility and mutual respect.”