The real issues of sustainable management in Lomié

Yaoundé, 14 May 2009 – In order to improve the understanding of the relationships between the formal and industrial logging sector and community forest management, the Facilitator Hans Schipulle went on a field visit to Lomié, “pioneer zone of community forestry in Cameroon”. The trip was organized by the deputy facilitator Samuel Makon and colleagues from the COMIFAC Support Office. Download the mission report (in French).

A meeting with organizations of a network gathering agro-forestry cooperatives and public service authorities has confirmed the positive opinion these NGOs have about certification.

According to the ROLD network’s representatives, the biggest challenge remains the capacity building among key actors with the aim of fostering the stimulating potential a certification process could have on developing both the economy and local governance capacity. Seeking an even more direct exchange with village residents committed in the process of community forestry, the small group around the facilitator then entered the deep forest. “We live in a climate of conviviality with the logging companies, a climate which could even be  strengthened as these companies committed themselves to comply with social indicators accepted by the certification bodies”, the village residents in Payo noticed. However, the impact remains weak on the local labor market where villagers are rarely recruited by forestry companies. Besides, we are still awaiting a real cooperation with local craftsmen with the aim of increasing the processing of products made of residual wood to sell them on local markets. 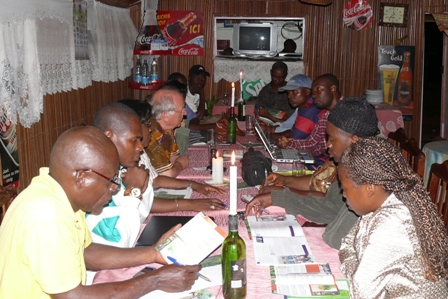 Following these consultations, the Facilitator took the opportunity of a meeting with Cameroon’s Forestry Minister Elvis Ngolle Ngolle to discuss the governance aspects that still hinder the trade of wood within both the country and the sub-region. Those obstacles are, among others, partly arbitrary controls of transport vehicles, “informal taxes” imposed at “check-points”, various other harassments encountered on the road and last but not least, obvious shortcomings in the coordination of the control bodies. Being aware of this issue, the Minister informed the facilitator a definite improvement of the situation would soon be noticed as an automated traceability system for which the FLEGT agreement between European Union and Cameroon provides would be introduced in short.

With the local facts in mind, the Facilitator has personally encouraged the mining company GEOVIC’s general manager to create more transparent relationships with the neighborhood population so as to enable them to take part in decision processes directly affecting their living conditions. Finally, he invited a ROLD network representative to the CBFP workshop. The workshop dealt with the role of industrial logging of industrial for sustainable management of the Congo Basin’s forests, and took place in Douala on the 19 and 20 May 2009 on the fringes of the Regional Consultative Committee. Together they tried to enter into dialogue with representatives of companies  which are in the process to become certified. In doing so, they seek to explore options to foster the cooperation among local communities around the area and to find possibilities to transform and commercialize residual wood on the local market.

The biosphere reserve of Dja is Cameroon’s biggest protected area with a surface of 560,000 ha and straddles two administrative regions of Cameroon (the Southern and Eastern regions). It covers the districts of Lomié, Abong-Mbang, Bengbis, Mintomb, Meyomessala and Djoum. In the Lomié district, like in all the others, the diversity of actors at the reserve periphery demands a perpetual conciliation between partly diverging interests of forestry, mining companies and local managers of community forests.