Keep the forests standing for people and the planet 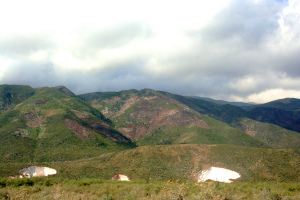 The Ayoreo people of western Paraguay, who include the last uncontacted indigenous peoples south of the Amazon, have an enemy that they call the beast with metal skin and an attacker of the world. Their spears cannot penetrate its flanks, although they have tried.

This beast in question is not the giant armadillo, a species native to the region, with its big bony shell and claws that can tear through a termite mound like butter. It is the bulldozer, which instead tears through the Gran Chaco, the forest where the Ayoreo live. Between 1990 and 2011, Paraguay lost more than three million hectares of the Chaco forest, displacing the Ayoreo and threatening creatures large and small, like the giant armadillos as well as jaguars, howler monkeys, and tapirs.

Every year, people destroy more than 13 million hectares of forests around the world, which equals more than 25 football fields full of trees every minute. This destruction separates people from the forests that provide them with their livelihoods, and eliminates habitat for endangered species on the ground, and even in the air. For example, forests provide habitat for more than three quartersof all globally threatened bird species.

But the environmental and social damage doesn’t stop there. Forests also shelter a tremendous amount of life, and provide food, medicine and other products to people. They also provide us with services, such as filtering fresh water as it collects and moves downstream, so that urban populations have clean water to drink. In fact, 33 of the world’s largest cities obtain their fresh water directly from protected expanses of forest. Globally, forests contribute to the livelihoods of 1.6 billion people worldwide.

In the case of Paraguay, one quarter of the forests have been cleared since 1990, mostly to grow soybeans and to provide pasture for the country’s livestock industry—two of its biggest economic engines. On the other side of the world, in Nigeria, more than one half of the country’s forest cover has been lost since 1990, making way for not just the expansion of agriculture, but also for mining and oil and gas projects. Forests have also been degraded through the collection of fuelwood, the primary source of fuel for about two-thirds of the country.

What Paraguay and Nigeria have in common is that both countries are looking at an international initiative, REDD+, to help keep their remaining trees standing. Reducing Emissions from Deforestation and Forest Degradation (REDD+) is an effort to create a financial value for the carbon stored in forests, offering incentives for developing countries to reduce emissions from activities on forested lands and invest in more sustainable forest management practices.

Sustainability is the key to REDD+; countries are exploring how the forests can be protected, and even restored, while still providing livelihoods and sustenance for the people who depend on them.

You can find this sustainability model in Nigeria. Cross River State, which contains more than half of the remaining tropical forest in the country, is implementing REDD+ as a way to protect its standing forests while also promoting their contribution to sustainable development. For many communities who live in or near the forests in Nigeria, products like bush mango, bushmeat and fuelwood play an important part in local livelihoods and economies.

Ecotourism is another growing segment of the local economy for communities in Nigeria. Travelers come to Cross River State not only to look at the ‘charismatic megafauna’—the forest elephants, gorillas and chimpanzees—but to seek out the more than 900 varieties of butterflies that live in the region’s tropical high forest or to experience its rugged mountains. Ecotourism thrives in the deep forests of the world; globally, it is worth as much as US$77 billion annually.

For these forests to survive—those in Nigeria, Paraguay, and everywhere else—REDD+ helps increase the value of trees in the eyes of national and local governments and other stakeholders in the private and public sectors. In mapping out where REDD+ activities could contribute to reducing poverty and inequality, and support the cultures of forest-dependent and indigenous peoples, REDD+ strengthens the hands of the environment ministries in land-use planning.

Put simply, if for all these reasons the forests have a quantifiable value in remaining standing, it becomes easier to argue that economic development should not destroy them. Several initiatives, including the UN-REDD Programme, the United Nations collaborative initiative on REDD+, are helping countries to plan better for REDD+ implementation by identifying the value their forests and REDD+ activities can bring.

The implementation of REDD+ and the launch of markets for the carbon credits that underpin the new value of the world’s forests—and the green economies that prosper in these forests—will be a primary topic at the upcoming international climate change negotiations—the Conference of Parties to the United Nations Framework Convention on Climate Change—taking place in Lima, Peru, December 1-12.

Last year’s negotiations provided guidelines on financing, transparency, and monitoring. This year, though, the stakes are higher and yet the world keeps losing more and more of its tree cover. Governments in Paraguay, Nigeria, and 54 other countries involved in the UN-REDD Programme are looking to REDD+ to stop this trend, help its people who depend on forests, and mitigate the climate change impacts that threaten us all. At Lima and beyond, we need to continue down the path of REDD+ implementation so that we as a global society can finally safeguard our forests.