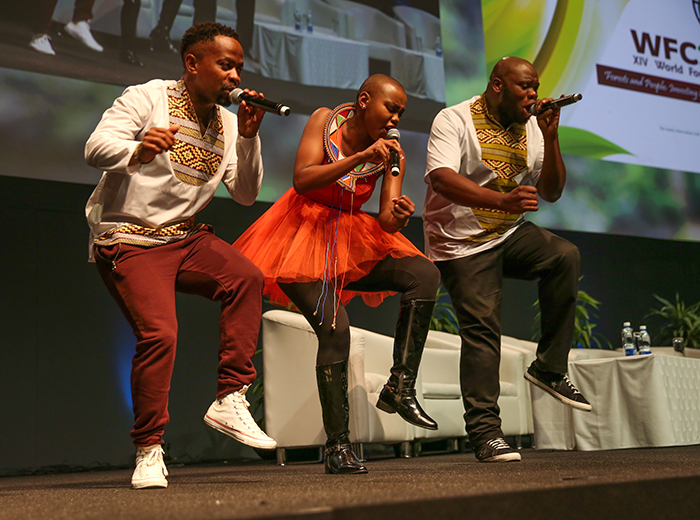 IISD Reporting Services, through its ENB+ Meeting Coverage, has produced daily web coverage and a summary report from the 14th World Forestry Congress (WFC XIV) - Forests and People: Investing in a Sustainable Future.

The last day of the XIV World Forestry Congress commenced with four parallel roundtable sessions during which participants considered the way forward on: forest information; building momentum for community-based forestry, and forest and farm organizations, which included the launch of the FAO-We Effect partnership; the youth; and forest and landscape restoration.

In the discussions on forest information, participants considered, inter alia, advances in forest biophysical data collection, gaps and limitations in socio-economic data collection, the need to account for population growth, urban sprawl, and water in data collection, and the need for synergy between data suppliers and data consumers.

On community-based forestry, forest and farm issues, participants noted that the voice of local communities have been stronger at this Congress than before, and that the issues of how to facilitate communities' access to finance, how to create an enabling environment for participation in the forestry sector and how to build trust between governments, communities, and the private sector need more work.

In the session on youth, delegates recommended for future Congresses: greater youth-initiated panels; training and collaborative sessions; improved accessibility for disadvantaged youth; and enhanced focus on building agency in the youth to take on initiatives in their own countries. Delegates identified that a global mentoring programme should: be strongly associated with cross-sectoral integration; avoid turning mentor-mentee relationships into a silo approach lacking communication across interest areas, and identify how the degree of structure of the programme reflects the cultural associations of where the mentorship takes place.

In the forests and landscape restoration roundtable, participants considered opportunities and challenges, highlighting: the role of research in generating knowledge and providing independent assessments to support decision making; the need for targeted, strategic finance and demonstrating value; existing tools, methods and frameworks; the need for further political support; the importance of tenure, legality and poverty alleviation approaches; and the need to improve coordination and collaboration drawing on linkages and synergies between different actors and sectors.

In the afternoon, during the closing plenary, three outcome documents emerging from the XIV WFC were presented. Messages were delivered from the Congress: to the UN General Assembly Summit for the adoption of the 2030 Agenda for Sustainable Development, emphasizing the multi-functionality of forests and their essential role for the SDGs; and a message on climate change calling for greater attention to forest-dependent communities and the critical role of forests for climate adaptation and mitigation. The XIV WFC Secretary-General read the Durban Declaration, which offers a vision for forests and forestry to contribute to achieving the 2030 Agenda for Sustainable Development.

During the closing ceremony, FAO’s Assistant Director-General and Regional Representative for Africa in concluding remarks, thanked the Republic of Korea and the Russian Federation for their expressions of interest to host the XV World Forestry Congress. The South African government applauded youth involvement and welcomed the Durban Declaration. After a musical performance by local band Afrosoul, a South African primary school performed a play on “ecosystem services and wellbeing - sustaining our needs, not greed.” XIV WFC Secretary-General Trevor Abrahams closed the Congress at 4:34 pm.