The Bonn Climate Change Conference took place in Bonn, Germany, from 4-15 June 2014, and included the 40th sessions of the Subsidiary Body for Implementation (SBI) and the Subsidiary Body for Scientific and Technological Advice (SBSTA). The fifth meeting of the second session of the Ad Hoc Working Group on the Durban Platform for Enhanced Action (ADP 2-5) also took place. The meeting brought together approximately 2790 participants, 1689 representing parties and observer states, 1068 from observer organizations, including non-governmental organizations (NGOs), and 37 media. 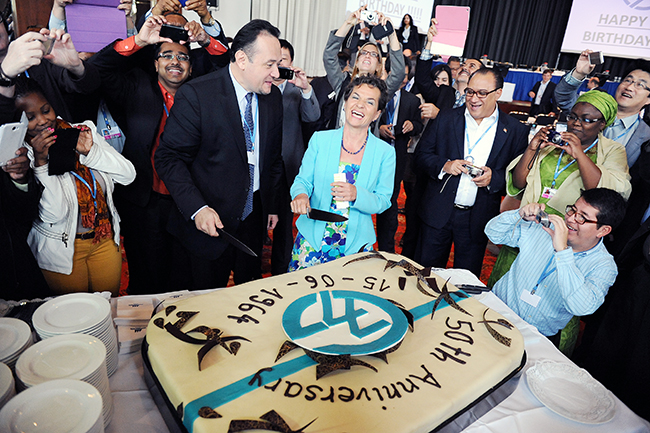 The Bonn Climate Change Conference marked the first time in UNFCCC history that high-level ministerial events convened outside of the Conference of the Parties (COP) and the COP serving as the Meeting of the Parties to the Kyoto Protocol (CMP). Ministerials convened during the first two days of the session, including the High-Level Ministerial Roundtable under the Kyoto Protocol, which aimed to assess implementation of the Protocol and provide ministers with an opportunity to increase their quantified emission limitation and reduction commitments (QELRCs). The High-Level Ministerial Dialogue on the Durban Platform for Enhanced Action aimed to raise pre-2020 ambition and provide momentum for negotiations on the 2015 agreement.

During the session, SBI 40 and SBSTA 40 began quickly moving through the items, with many considered in informal consultations rather than contact groups. SBI 40 made good progress, according to many, on issues including Convention Article 6 (education, training and public awareness). SBSTA 40 achieved progress as characterized by many on agriculture, and research and systematic observation.

ADP 2-5 convened in a contact group at this session, as decided at ADP 2-4 in March 2014, structured around workstream 1 (2015 agreement) and workstream 2 (pre-2020 ambition). Under workstream 1, the ADP discussed: mitigation; adaptation; finance; technology and capacity building (means of implementation); transparency; intended nationally determined contributions (INDCs); and other issues related to elements. Under workstream 2, Thematic Expert Meetings (TEMs) on the urban environment and land use were organized, and a forum on the role of cities and subnational authorities in mitigation and adaptation also convened.