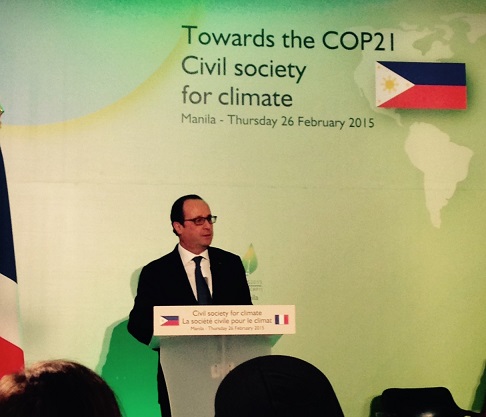 MANILA, 26 Feb. 2015 — As one of the most disaster-prone countries in the world that are at-risk from climate change, the Philippines is among the main countries that could finance priority adaptation investments through the Green Climate Fund (GCF). This is one of the messages the Executive Director of the Fund, Ms. Héla Cheikhrouhou, conveyed to senior officials of the Philippine government as part of her participation in a high-level mission to the country led by French President François Hollande.

“The Philippines is at the front-line of climate change — both in terms of impact and with respect to the opportunities that exist for the Fund to support the country in increasing its climate resilience,” said Ms. Cheikhrouhou.

Numerous studies place the Philippines at the top of countries most affected by climate change, including environmental organizational Germanwatch that listed the country as most at-risk in its 2015 Global Climate Risk Index report.

A rapidly expanding population, unsustainable land use and extreme weather events have significantly increased the Philippine’s vulnerability to climate change. It is estimated that about 60% of the country’s municipalities and cities located along the coast, impacts of sea level rise due to both climate change and local land subsidence are already severe. Agriculture, water resources, fisheries, health, and infrastructure are likely to be severely impacted by climate change.

The Philippine Government is already prioritizing its response to climate change and environmental degradation, including through its own financial resources.

As part of its unique mandate, the Green Climate Fund stands ready to provide funding at scale to finance adaptation initiatives, to the tune of half of its activities, compared to only around one tenth of global climate finance so far directed at supporting adaptation.

In her interactions with the French and Philippine high level officials, Ms. Cheikhrouhou cautioned that the Fund’s ability to deliver on its mandate to finance climate adaption now centres on receiving the financial resources that were pledged to the Fund in 2014.

“The Fund aims to approve projects and programmes starting from October this year, and we can support countries like the Philippines, provided that contributors accelerate the pace of turning all their pledges to actual contributions ahead of this year’s pivotal climate change conference in Paris,” underlined Ms. Cheikhrouhou. This would support the trust-building momentum towards the conclusion of a global climate agreement...