FSC engagement and certification in the Congo Basin

The FSC inform on recent developments related to its engagement and activities in the Congo Basin - The titles of the article: (1) High Conservation Value Forests (HCVFs); (2) Discussion on preconditions to FSC certification (3) Accreditation Services International (ASI) audits (4) Regional standard for the Congo Basin (5) Mediating understanding between parties.

Please download the PDF version of the article: HERE 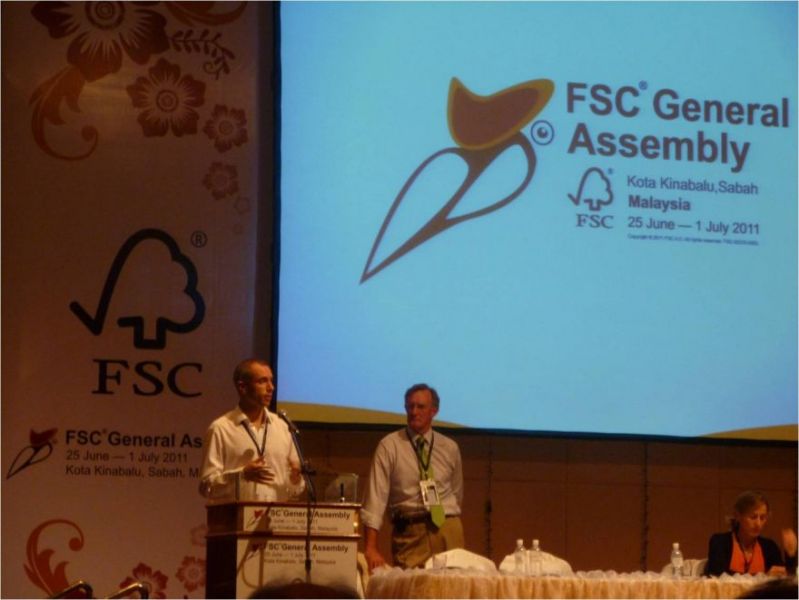 1. High Conservation Value Forests (HCVFs) FSC is working on guidance on High Conservation Value Forests (HCVF) and the way Intact Forest Landscapes (IFLs) are considered within this concept. An Expert Group, including two Greenpeace International staff members, is contributing to the devel-opment of this guidance. A draft of the guidance was already discussed at the FSC General Assembly at the open HCV side meeting. We expect the HCVF guidance to be going out for public consultation shortly, and that the guidance will be finalized by the end of 2011.

2. Discussion on preconditions to FSC certification FSC has produced a discussion paper on high risk areas and potential pre-conditions and safeguards for FSC certification. This paper is to discuss what preconditions or additional safeguards are necessary for credible certification in places where some key elements may be absent (e.g. land use planning, poor governance). FSC has already re-ceived constructive feedback from Greenpeace on a first draft, and has now circulated a draft of this paper to the membership for wider consultation and comment.

3. Accreditation Services International (ASI) audits Given the different perceptions about the quality of FSC certification in the Congo Basin, FSC has re-quested that ASI audits all the FM and CW/FM cases in the Congo Basin, focusing on ‘on the ground’ performance and on key issues such as HCV, community relations and legality. The audits will be con-ducted in 2011 and the first audit is scheduled for 13 – 24 September 2011, in the CIB concession in the Republic of Congo. The rest of the audits will take place between September and December 2011, and ASI is now in the process of arranging these with the certification bodies and certificate holders.

4. Regional standard for the Congo Basin The FSC regional Congo Basin standard draft has largely been completed. There are few but important remaining issues, such as HCV Guidance. The interna-tional guidance on HCV (see above, point 1) will be used to assist in the interpretation of HCV in the Congo Basin context. The stakeholder consultation on the basics of the standard is finalised and the draft is now being evaluated by PSU.

5. Mediating understanding between parties FSC is working to organize field visits to both certified and uncertified forests in order to gain firsthand experience on what is happening on the ground in the Congo Basin. Key stakeholders from diverse interests and backgrounds have shown great interest in this opportunity. FSC will continue to liaise with all parties on the issues at hand, and involve key part-ners.