On 18 December 2008, the European Commission and UNESCO signed an agreement in Libreville, Gabon for a contribution of €2.5 million to the Central Africa World Heritage Forest Initiative (CAWFHI). 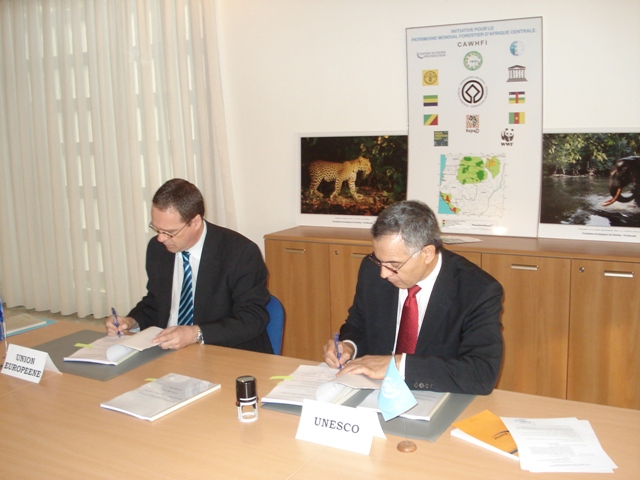 The programme aims to improve the sustainable management of 3 transboundary protected areas in Cameroon, Central African Republic, Republic of the Congo and in Gabon: Tri National Dja-Odzala-Minkébé (TRIDOM), Tri National de la Sangha (TNS) and the Gamba Conkouati landscape.  The overall objective is to support the States Parties and members of the Central African Forest Commission (COMIFAC) in establishing a Convergence Plan for the sustainable management of the forests of the Congo Basin (Brazzaville 2005).

This new component financed by the European Commission will reinforce the activities and actions of CAWHFI until 2011 and allow the project to consolidate initiatives in favor of the conservation and sustainable development of the spaces, species and peoples of the Congo Basin. It will also enhance the values of these sites in the Republic of the Congo, Central African Republic and Gabon with a view to eventually inscribing these sites on the World Heritage List.

This commitment by the European Union reinforces the efforts by UNESCO in Central Africa to promote World Heritage sites and the outstanding universal value of the natural World Heritage in the region.

The announcement and official launch of this new component will take place during the next meeting of the CAWFHI Steering Committee in Yaoundé, Cameroon from 30 March to 4 April 2009 (dates to be confirmed).