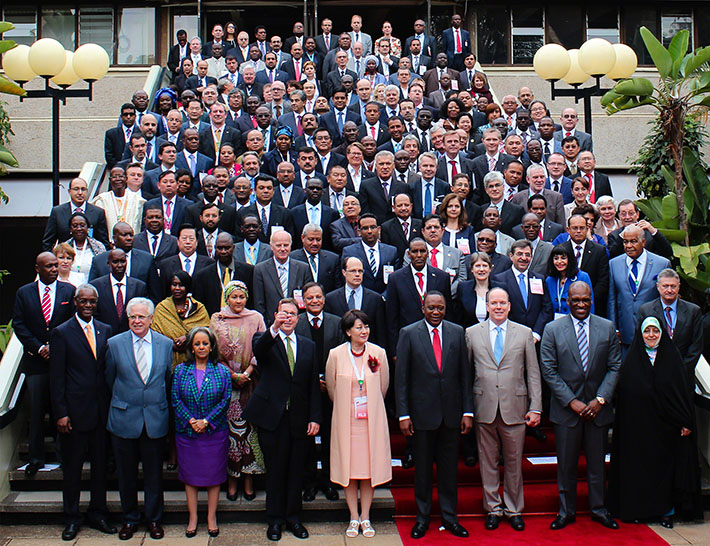 The first United Nations Environment Assembly (UNEA) of the United Nations Environment Programme (UNEP) was held at UNEP headquarters in Nairobi, Kenya, from 23-27 June 2014. More than 1,200 participants, including environment ministers, heads of international organizations, government representatives, civil society representatives and business leaders, attended the assembly. The overarching theme of the session was “Sustainable Development Goals and the Post-2015 Development Agenda, including sustainable consumption and production.”

During the week, delegates convened in plenary sessions, a Committee of the Whole (COW), and several working and contact groups to consider draft decisions. Ministers and international leaders including UN Secretary-General Ban Ki-moon and John Ashe, President of the 68th UN General Assembly, gathered during UNEA’s High-level Segment (HLS), themed “A Life of Dignity for All.” Participants addressed two issues: sustainable development goals (SDGs), including sustainable consumption and production (SCP); and illegal trade in wildlife, focusing on the escalation in poaching and the surge in related environmental crime. In addition to the ministerial discussions, the UNEA convened two symposia addressing two key aspects of environmental sustainability: the environmental rule of law and financing a green economy.

Delegates adopted one decision and 17 resolutions on, inter alia: strengthening UNEP’s role in promoting air quality; the science-policy interface (SPI); ecosystem-based adaptation (EBA); implementation of Principle 10 of the Rio Declaration on Environment and Development; illegal trade in wildlife; chemicals and waste; and marine debris and microplastics. During the closing plenary on Friday, the Ministerial Outcome Document of the UNEA of UNEP was adopted, although several member states noted their reservations with the document. Many described the first session of the UNEA as a historic event but called for continued efforts to strengthen UNEP to support implementation of the post-2015 development agenda.