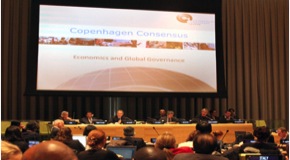 It took place from 9 to 13 December 2013, at the United Nations (UN) headquarters in New York. The key gathering was attended by OEWG Member States, other non Member States, observers and representatives of UN agencies and Major Groups. For 4 days, participants discussed issues related to:

♦ the global partnership for sustainable development;

♦ human rights, the right to development and global governance.

At the end of the deliberations, participants arrived at major conclusions on:

♦ Points of convergence between the delegations,

♦ The need for a strengthened partnership for equitable and inclusive implementation of the SDGs,

♦ the importance of science, technology and innovation; enhancing statistic and data collection capacities in developing countries.

For more information on the conduct and proceedings of the sixth session of the OEWG, kindly click on the following link: Here