cop21.gouv.fr/Laurent Fabius hands over the keys of Le Bourget to the UN 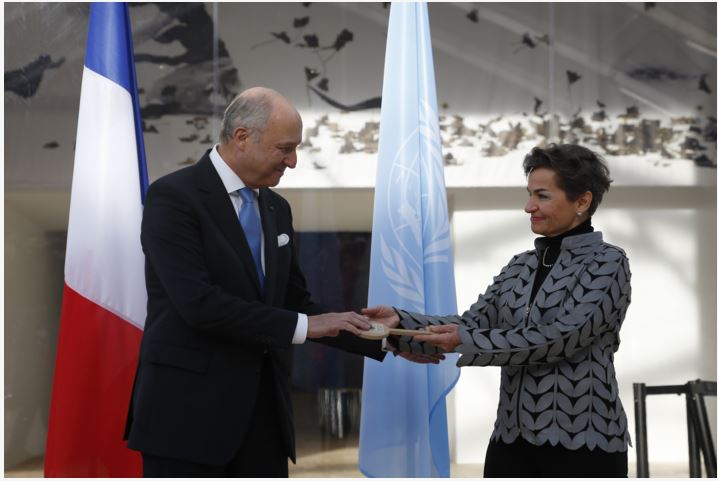 The Conference Centre, a space for negotiations also called the “Blue Zone”, was officially placed under the responsibility of the United Nations at 2 p.m. on Saturday 28 November. French Minister of Foreign Affairs and incoming COP21 President Laurent Fabius symbolically handed over the keys to Christina Figueres, Executive Secretary of the UNFCCC. This Zone, which is only open to accredited persons, will from now on be managed by the United Nations, with security handled by UN Blue Guards.

Laurent Fabius and Christiana Figueres then together took a tour of the COP21 site in Le Bourget before holding a press conference. Foreign Minister Laurent Fabius stressed that “the French presidency will be impartial and will seek compromises”. “The goal is to have an agreement on 11 December,” reiterated the incoming COP21 President.

Meanwhile, Christiana Figueres, Executive Secretary of the UNFCCC, highlighted that “this is the first time in history that so many countries have submitted their contributions for tackling climate change”. In total, 183 countries, representing 95% of the world’s greenhouse gas (GHG) emissions, have published their roadmaps for reducing GHG emissions. For further information on national contributions, click here.

Negotiations will begin tomorrow at 5 p.m. with an early opening plenary session in order to “make the best possible use of the very limited time available to delegates to finalize the draft agreement”. For further information on the timetable for the two weeks, click here.