Conclusions of the 7th CBFP-CCR session

Douala, May 18 and 19 2009 - The seventh meeting of the Regional Consultative Committee of the Congo Basin Forest Partnership (CBFP) was very well attended by the members of the subregion, including the local partners of the COMIFAC (Central African Forests Commission). Some 70 participants representing the member countries, international organisations, local and international NGOs, research institutions and the private sector attended this statutory CBFP meeting organised by the German Facilitation.  The event was also honoured by the presence of Mr Elvis Ngolle Ngolle, Minister of Forestry and Wildlife in Cameroon, the country hosting the meeting, and Mr Emanuel Bizot, Minister of in charge of forest matters in the Central African Republic and COMIFAC president-in-office.

Proceedings of the meeting - English translation courtesy of GTZ

Picture (Herbert Christ):Emanuel Bizot, COMIFAC president in office - during his introductory speech. On his left side: Martin Tadoum and Raymond Mbitikon, SE COMIFAC. To the right: Elvis Ngolle Ngolle, Ministry of Forestry and WIldlife in Cameroon and Hans Schipulle, CBFP Facilitator. 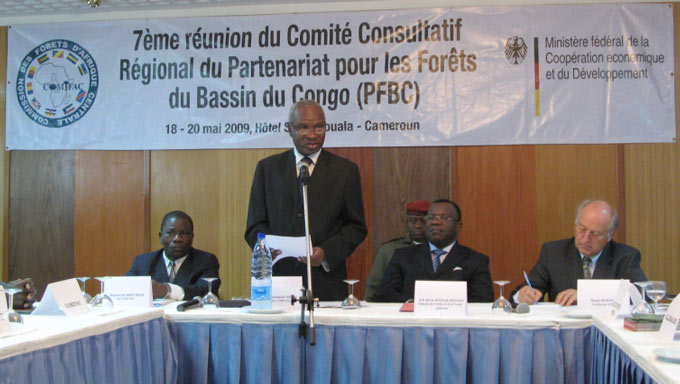 Please find below the English translation (offered by GTZ language department)  of the Facilitator'c conclusions read out at the end of the meeting. You can download the original (French) conclusions and the documentation of the workshop (French) on this website.

• The subject of an autonomous financing mechanism for the COMIFAC, mentioned by the Facilitator in his words of introduction, was one of the key issues discussed during the plenary sessions. The partners stressed that their main motivation for intervening in the forest sector in the subregion was initially to support viable institutions operating as the hub of a sovereign process in Central African countries. Today, all the CBFP members agree with the analysis that the COMIFAC system is faced with a disastrous financial situation and the precarious operation of its institutions, which poses problems for its credibility. The fact that the COMIFAC is performing an increasing number of tasks associated with the coordination of numerous projects funded by partners has further exacerbated these difficulties.

All the partners share the view that it is necessary to provide the institution with a sustainable foundation and funding, rather than continuing to use stopgaps. The responsibility for ensuring that this matter is delayed no further lies partly with the COMIFAC member countries, considering that the declarations and agreements signed by the ministers on this subject are a priori reasonably clear.  However, the CBFP members also have a responsibility in this regard when they design their support programmes or have recourse, sometimes too easily, to external funding. They unanimously reject any solution that would involve replacing an independent financing system with other types of funding, particularly those associated with support projects. The CBFP members are of the view that only a concerted political effort in the subregion can and should provide a solution to the problem. They consider that all the partners should take special care not to jeopardise this consensus by sending out mixed signals about financial support for the operation of the COMIFAC system.

• With regard to dialogue with China, the partners applauded the efforts undertaken by the Facilitation to forge closer relations and establish a dialogue between the CBFP, as a multi-actor network involved in the forest sector in the Congo Basin, and China. A consensus emerged from the debate to the effect that the CBFP would pursue this approach with China, the World Wildlife Fund (WWF), the European Union and the private sector and that an official visit to China by a COMIFAC delegation should be organised. The CBFP Facilitation, in conjunction with the COMIFAC Executive Secretariat, will propose a roadmap to prepare the next steps to be taken to establish more direct relations between the Central African countries and China. Furthermore, this will put the CBFP in a position to play a privileged liaison role in the development of new triangular cooperation channels linking China, Africa and the European Union.

• With regard to forest governance, the partners took note of progress made in the negotiations on forest law enforcement, governance and trade (FLEGT). They encouraged other countries in the subregion to follow the example of the Republic of the Congo, which has just signed a partnership agreement with the European Union. The fundamental question arising from the exchanges was how to integrate timber from European Union forests into the process to establish the legality of logging operations. In view of the current crisis affecting the timber sector, it would be important to encourage trade efforts at the national and regional level, which could improve the traceability of timber in Central African countries. Such efforts should be supported by the AFLEGT/FLEG (African forest law enforcement, governance and trade/forest law enforcement and governance) task-force.

• It was also noted that the final stage of the logging title conversion process in the Democratic Republic of the Congo was carried out in a participatory spirit of independence and consultation. The CBFP supported this process in spite of the criticisms levelled at it. The conversion of the old logging titles constitutes a good basis for progressing towards the situation of legality required to move forward with the sustainable development and management of forest concessions. The choice of certification methods and systems required to ensure the cost-effectiveness of sustainable forest management efforts by logging companies will largely depend on the markets where the timber products are to be sold. The CBFP continues to support the working group that has begun the task of developing regional standards to ensure the credibility of these certificates. The fact that the Forest Stewardship Council (FSC) plans to move its African headquarters from Ghana to Cameroon was considered an indication of the attention that certification bodies are paying to the Central African subregion, committed to the promotion of sustainable forest resource management.

• The CBFP members also support the COMIFAC countries in developing capacities associated with international forest dialogue other than that conducted in connection with the United Nations Framework Convention on Climate Change (UNFCCC). Globally, the COMIFAC, as a regional actor, is much more visible now in the various forest-related processes in progress than it was ten years ago. Nevertheless, it was observed that the formulation of very advanced technical positions alone is not enough to promote the interests of the subregion. All the partners agreed on the need to make an appeal at the political level and cooperate with professional negotiators to improve coordination, although efforts to strengthen negotiating techniques must not be neglected. In short, it can be said that Central Africa has built an exemplary image of good management, which will allow it to participate in debates on the subject with pride.

• Finally, the publication of the State of the Forests 2010 report, considered the flagship product of collaboration between the two bodies, will provide a good opportunity to showcase the work carried out under the partnership. Advantage should be taken of the upcoming African Union summit of heads of state and government to organise a parallel event, with a view to using the State of the Forests report to convey the position of the subregion within the framework of the UNFCCC, where Africa has not yet submitted a position. It would, however, be necessary to ensure that the next edition of the report included sections on countries that do not play a central role in the COMIFAC, such as Rwanda, Burundi and Chad. The members contributing to data collection also emphasised the responsibility of national authorities to produce accurate and reliable data, as the quality of the report and the assessment of prospects relating to the evolution of forest cover largely depend on the availability of valid information.

• With regard to support for the COMIFAC, the evaluation of the implementation of the three-year plan of operations for 2006-2008, formulated under the Convergence Plan, provided the basis for planning for the period 2009-2011. It revealed significant differences in the degree of implementation of the Convergence Plan by the stakeholders and the weak operational capacity of regional partners. In the implementation of the plan of operations for 2009-20011, the findings of the evaluation should contribute not only to bringing all the stakeholders into line, but also to fulfilling the commitment of leaders to implement the agreements signed under the Convergence Plan. The credibility of the COMIFAC depends on the willingness of the member countries to provide the funding necessary to ensure that it can work effectively and complete the process to reform the partner institutions.

• With regard to the implementation of programmes supporting the COMIFAC (African Development Bank, Canadian International Development Agency (CIDA), Global Environment Facility/World Bank, etc.) and with a view to avoiding any overlapping or duplication of efforts undertaken by partners and facilitating the work of the Executive Secretariat, the CBFP members expressed their desire to improve dialogue, collaboration and coordination efforts relating to actions aimed at promoting a common approach by the partners, while at the same time making the most of opportunities provided by the COMIFAC support office (cooperation platform) in order to implement the COMIFAC Convergence Plan. The same applies to support provided by other donors and the main policy directions.