Participants review the work plan of the ad hoc committee, amend an advocacy for EFH in the management of natural and forest resources in the Congo Basin countries and make recommendations towards the implementation (1) of the study on gender mainstreaming in COMIFAC Convergence Plan and (2) national (and sub-regional) consultations with regard to COMIFAC Gender strategy.

The sixth meeting of COMIFAC ad hoc Committee on Gender held in Yaounde (Cameroon) on 17 June 2011. This meeting aimed at amending the work plan of the Ad hoc committee on Gender. Points on the agenda included: presentation of the Ad Hoc Committee work plan, drafting of the advocacy document, preparations for national and sub-regional consultations as well as for the sub-regional workshop to validate COMIFAC Gender strategy, and discussions on the formalization of the ad hoc committee on Gender. Chaired by Henriette Bikié (COMIFAC ES) and facilitated by Julienne TSANGUEU-SEPPOU mobilized by CIDA, the meeting was attended by the representative of REFADD, representatives of technical and financial partners (GIZ, CIDA, FAO, SRAFM) and the representative of CBFP Facilitation. 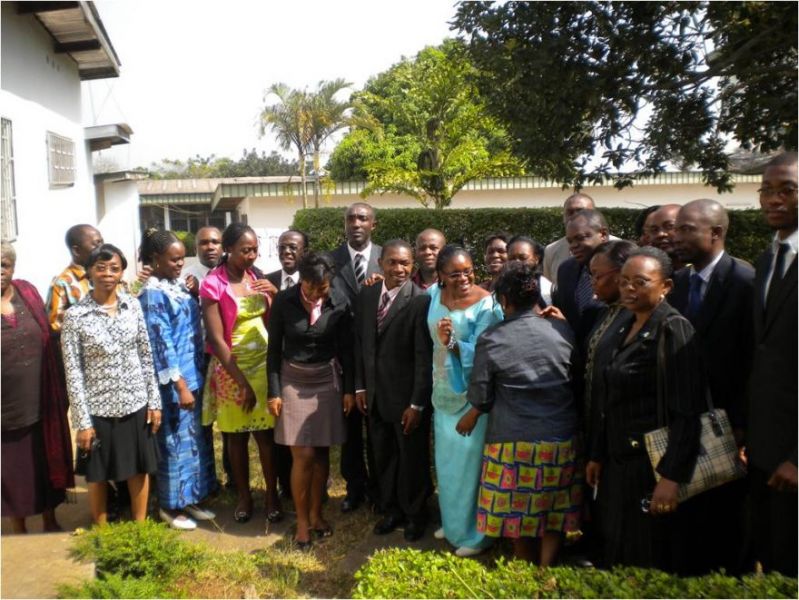 After adopting the agenda, participants followed the presentation of the Facilitator, Julienne-TSANGUEU SEPPOU on the state of the work plan of this ad hoc committee taking into account the amendments and recommendations made during previous meetings. To this end, the following activities are being carried out within the ad hoc committee since the inception of the committee during the workshop in February 2011: (1) Information gathering (2) Draft Resolution (3) Planning of CAG activities and their TOR (4) TOR of national consultants and the strategy (5) advocacy for a Gender strategy (6) Preparation of an analysis on the organizational structure of COMIFAC (7) Strategy for gender mainstreaming (8 ) Validation of the process of gender mainstreaming in the CP, adoption of the Resolution and validation of the Gender strategy (9) Sub-regional guidelines on gender mainstreaming ... (9) Adoption of the Guideline. Moreover, it was announced that the terms of reference of each of these activities are available (Family Photo left -taken in  the information and sensitization workshop on gender and its integretion in COMIFAC Convergence Plan held on 11 January 2011 in the conference hall at the Benedictine Monastery on Mont Fébé in Yaoundé @ SE COMIFAC)

Then followed intense and fruitful discussions on the activities and timing of the work plan. The activities below still need to be integrated into the PTA:

♦ Identification of items to be considered in including the gender mainstreaming process in COMIFAC Convergence Plan.

Drafting of the advocacy document in support of EFH in the management of natural and forest resources in the Congo Basin countries - The draft document was examined and reviewed by the participants. It was observed that the structure of the advocacy document for which the ad hoc committee prepared terms of reference had been amended. As a matter of fact, since the latter was not among documents for the Council of Ministers in May 2011 as originally planned, the facilitator drafted it as an advocacy instrument to be used by COMIFAC on several occasions. Due to time constraints, the document could not be examined thoroughly. Committee members will continue to discuss its content. In a bid to improve the readability of the document, it was agreed that a flyer (leaflet) should be drafted.

National consultations - and preparations for the sub-regional workshop to validate COMIFAC sub-regional strategy on Gender - These two activities of the work plan were given special attention by members of the Ad Hoc Committee – in fact, a workshop to validate the sub-regional strategy on Gender is to hold during the month of November, before the extraordinary session of the Council of Ministers scheduled to hold in November. It was agreed that the terms of reference on national and regional consultations had to first of all be validated by the COMIFAC DES, in compliance with the work plan of the ad hoc committee. Given time constraints, once the ad hoc committee would have agreed on their content, the committee chairperson will be responsible for officially forwarding them to COMIFAC deputy Executive Secretary for validation.

Concerning the formalization of the COMIFAC ad hoc committee on Gender, there were some differences in opinion. For some participants, it is necessary to have a text describing the group and its mission, as well as its organization in order to provide a clear mandate of the Group to third parties, for others, the group is a COMIFAC ad hoc committee which is used from time to time and whose mandate and mission could be modified by COMIFAC according to its needs and whose organization should therefore not be rigid. Although all did not agree on this issue, it was decided that the chairperson of the ad hoc Committee should forward to the Committee, documents resulting from the workshop of February 2011 on the establishment of the Ad hoc Committee on gender in order to remind participants on the purpose and mission of COMIFAC ad hoc committee on gender. The concern being that "COMIFAC" remains the driving force behind the process.