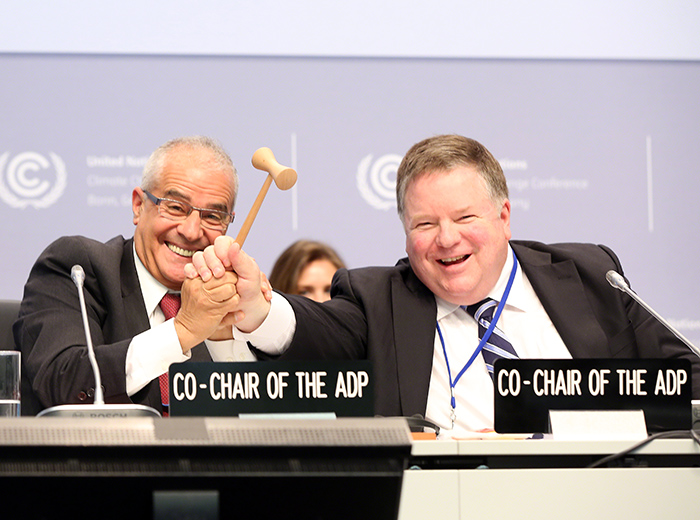 ADP 2-10 continued on Thursday, 3 September 2015, in Bonn, Germany. Delegates gathered in facilitated groups on: adaptation and loss and damage, technology, mitigation, transparency, and timeframes in the morning; finance, preamble, implementation and compliance, and capacity building in the afternoon; and general/objective and workstream 2 (pre-2020 ambition) in the evening. Throughout the day, informal meetings of the facilitated groups also took place.

Reporting back from the spin-off on loss and damage, GRENADA highlighted two proposals: from the G-77/China, placing a loss and damage mechanism with a climate displacement coordination facility in the agreement, noting that this mechanism would replace the Warsaw International Mechanism (WIM) after 2020; and from the US, the EU, Switzerland and Australia, addressing loss and damage through COP decisions, and capturing the WIM’s permanence.

Co-Facilitator Guerrero summarized the spin-off’s discussions on adaptation, including: the possibility of a long-term global goal or vision to reduce vulnerability and increase adaptive capacity; and potential means to achieve such a vision, including sharing knowledge, MOI, and improving science.

Spin-offs met in the afternoon to consider textual proposals.

MITIGATION: This session was co-facilitated by Franz Perrez (Switzerland).

On collective efforts, CHINA suggested focusing on providing a long-term objective. Colombia, for AILAC, said the section on general/objective should include a global goal, to be operationalized in relevant sections of the agreement. CANADA noted that COP decisions are appropriate to enable action in line with the latest science.

On differentiation, AILAC supported reference to commitments by all parties. NEW ZEALAND, CANADA and JAPAN said language on differentiation belongs to the paragraph on individual efforts. A number of developing countries said collective efforts should be linked to CBDR, equity and Convention Article 4 (commitments).

The MARSHALL ISLANDS called for clarity on the relationship between the general/objective section and collective efforts on mitigation. Co-Facilitator Perrez said discussions would inform his input to the ADP Co-Chairs.

TECHNOLOGY TRANSFER AND DEVELOPMENT: Tosi Mpanu-Mpanu (the Democratic Republic of Congo) co-facilitated the session. CANADA reported on Wednesday’s spin-offs, noting constructive discussions on the framework for enhanced action, and presenting a list of key aspects of the technology section.

The EU and the US highlighted convergence on the role and importance of technology, cooperative action and anchoring institutions.

Swaziland, for the AFRICAN GROUP, suggested further work on periodic assessments of institutional arrangements through COP decisions. The EU stated that a COP decision could strengthen institutions, while IRAN preferred doing so in the agreement.

Co-Facilitator Mpanu-Mpanu encouraged the spin-off to engage in a drafting exercise on cooperative action, the framework and institutions.

TRANSPARENCY: This session was co-facilitated by Fook Seng Kwok (Singapore). ALGERIA called for avoiding a mitigation-centric MRV system. Singapore, for AOSIS, presented a framing paragraph for this section of the agreement, conveying that developed countries shall provide adequate support for effective participation of developing countries in the transparency system.

China, for the LMDCs, presented a proposal that, inter alia, reflects that the extent to which developing countries can implement MRV arrangements will depend on developed countries’ financial support.

The EU underlined that textual proposals should be “bridging,” which she said implies a prior discussion among parties with varying views.

INDIA and BRAZIL called for capturing the full scope of “support.” The US suggested spelling out the capacity-building aspect.

The EU reported that Wednesday’s spin-off had identified various ways accounting can be used, and had compiled different, though not necessarily contradictory, perspectives on accountability.

Parties agreed to hold a final informal meeting to hear suggestions on elements for the agreement versus decisions, and on clarifying the different types of support.

TIMEFRAMES: This session was co-facilitated by Roberto Dondisch (Mexico). Adaptation and finance Co-Facilitators, respectively Andrea Guerrero and Diann Black-Layne, reported on discussions relating to timing in their groups. Parties then discussed a list of key elements presented by Co-Facilitator  Dondisch.

Many supported including a general stocktaking of global progress in the agreement. BRAZIL suggested the agreement establish a process for the stocktaking, with inputs deriving from existing processes under the Convention, such as the review of the adequacy of finance; and output timed at least one year before parties submit revised NDCs. The EU suggested a synthesis report coming out of the stocktaking.