Yaoundé, November 27 - During the last Congo Basin Forest Fund governing council's discussion, council members replied to COMIFAC's call for further technical and scientific support for REDD negociations after Copenhagen by urging the Central African countries for a strong ownership at the highest political level and improved representation of the region's position during the climate negociations. COMIFAC, represented through the incumbent president Emanuel Bizot and the executive secretary Raymond Mbitikon, and the Congo Basin Forest Partnership, represented through the Facilitator Hans Schipulle, actively attended the 3rd face-to-face meeting of the CBFF Council from 26 to 27 November in Yaoundé. The encounter was co-chaired by former Canadian Prime Minister Paul Martin and Nobel Laureate Wangari Maathai. Chairs and participants alluded to COMIFAC and CBFP as programmatic reference and strategic umbrella of the fund which aims at funding REDD related projects in COMIFAC countries. Wangari Maathia, far from simply advocating for a privileged treatment of NGO - as for the moment the only applicants and recipients of CBFF financial support for their programs - stressed the need to adhere to rules and procedures of the African Bank of Development as the CBFF's fund manager in monitoring performance and expenditures. Paul Martin underlined the necessity to improve COMIFAC ministers' involvement in funding allocation even though it should stay clear that they would not be given formal veto power.

Talking of Central African leaders' political ownership in the preparation for UNFCCC COP 15 in Copenhagen, Hans Schipulle underlined the role of President Sassou (Congo) talking on the issue in front of the last UN General Assembly in September, the Central African Republic's Prime Minister Faustin Archange Touadéra active participation at the REDD round table during the US-CBFP meeting and José Endundo's (Democratic Republic of Congo) role at the level of Pan-African coordination. Despite these positive examples, the CBFP facilitator openly deplored the lack of proactive, result-driven cooperation in the Central African Region. His concerns were echoed by many other council members, with Paul Martin expressing the hope that relevant side events at Copenhagen will provide the opportunity to raise attention of Central African leaders. 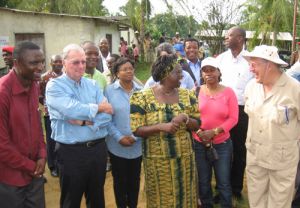 Referring to the fund’s portfolio, Hans Schipulle raised concerns about creating so-called "conservation concessions". "Promoting the simplified idea of conservation versus production would challenge the basic message of developing sustainable forest management in conformity with the COMIFAC Conversion Plan (Regional Strategy). It would divert scarce funding from supporting existing protected areas, while compensation from a REDD mechanism and other payments for environmental services will, for the time being, barely be able to offset forgone tax revenues or income losses of employees in the forest industry." A vivid discussion on the basic understandings of forest management in the Congo Region culminated in the Chairs's request to prepare a note on the state of the art of the debate, to be discussed during the next session of the Council. Referring to the example of the CBFP supported workshop on the DRC concession titles conversion process, Hans Schipulle suggested the Congo Basin Forest Partnership as the appropriate forum for contributions to a strategic dialogue. "As a multi-lateral and non-binding network we are able to bring together actors with divergent ideas and mediate between conflicting interests."

Concerning the progress of establishing the CBFF Secretariat and other support structures, the African Bank for Development informed the Council members that former regional World Bank Manager Clotilde Ngomba will lead the team at the Tunis headquarters, local antennas will be estbalished in Yaoundé (Véronique Tschimbalanga) and Kinshasa (Christine Dovounou). The Fund Management Agent, with offices in the region, whose main assignment is to monitor small to medium-sized project implementation under the supervision of the Secreatariat will be identified by end of 2009. While being fully aware of the fiduciary and programmatic risks entailed, Council further agreed in principle to identify one umbrella NGO that would monitor mini-projects (up to 80 000 Euro) throughout the entire COMIFAC region on behalf of the CBFF Secretariat. Once the institutional support in place, the pace of CBFF implementation should rise significantly, ADB Vice President Kamal Elkeshen reassured critical voices. Council also approved funding for four other NGO-led projects, which brings the number of project approvals to 14, representing about 14 Mio Euro, all allocated to NGO applicants. Council agreed that proposals could also be put forward by the Council and Secretariat itself, and encouraged governments of COMIFAC countries to consider application.

The second call for proposals has been published on December 1 (http://www.cbf-fund.org/cn/proposals/current_call.php). The 7th session of the CBFF Council will be held in April 2010 in Libreville or Tunis.