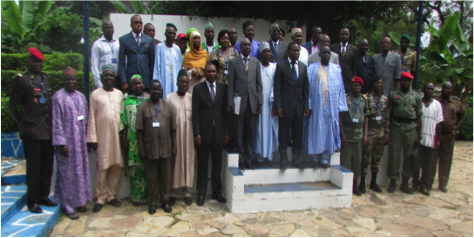 The city of Garoua, Cameroon, provided the venue for a major training workshop of State actors on anti-poaching laws and regulations, hosted by IUCN from August 27 to 28, 2014, as part of implementation of the "Capacity Building / Sensitization of Actors of North Savanna Ecosystems in Central Africa in the fight against poaching" Project, funded by ECCAS / EU.

To achieve its aim, the workshop drew on presentations revolving around the following modules: Public Policy (Public policy in wildlife management, laws, ongoing management, management bodies and challenges encountered) WILDLIFE LEGISLATION (classes of wildlife protection at national and international level, legal exploitation of wildlife, sanctions, penalties, transactions, etc.) IMPORTANCE AND DYNAMICS OF WILDLIFE, POACHING AND ITS IMPLICATIONS. Discussions between participants at the workshop centered on stakeholder involvement in the fight against poaching.

At the end of the workshop, the attendees pledged to help disseminate anti-poaching legal texts among their colleagues and work together towards greater efficiency in the crusade against wildlife crime in Cameroon in general, and the Bouba Ndjida National Park in particular. They also put ​​recommendations to various stakeholders in the fight against poaching namely:

♦ To the administrative authorities, they requested that monitoring of this workshop’s activities be included among the tasks of the Regional Anti-poaching Committee; that they should increase awareness of the negative effects of poaching; promote collaboration between various state actors in synergy with MINFOF (create a collaboration framework); strengthen platforms for dialogue between different states in the fight against cross-border poaching and conduct advocacy for ongoing situations to be taken into account in the wildlife law under review;

♦  to the law enforcement officers, they recommended supporting actors in the field to develop admissible reports;

♦ to the forces of law and order, that they should collaborate effectively with the eco-park rangers and MINFOF in general;

♦  to the MINFOF authorities, that they be proactive in working with actors who help protect the Park and support the income-generating activities of the park’s local community;

It is on this note of recommendations that the workshop was brought to a close to the satisfaction of the workshop organizers and participants.

For more information on the conduct of the workshop, please consult the downloadable final communiqué below: HERE