On the banality of forest governance fragmentation: Exploring ‘‘gecko politics’’ as a bureaucratic behaviour in limited statehood 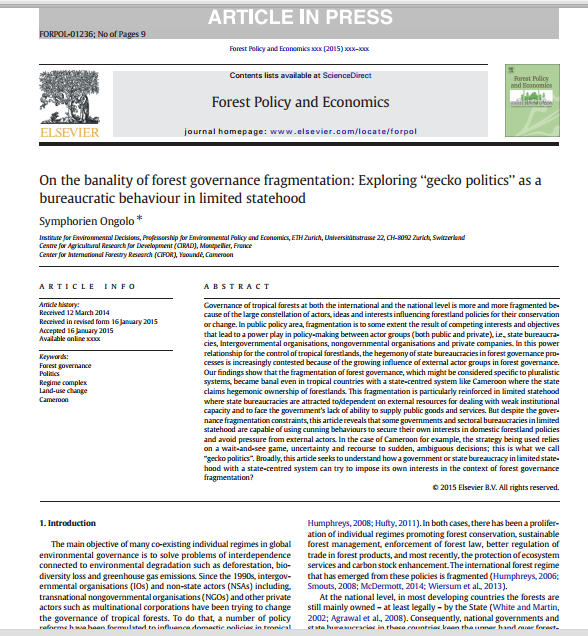 Governance of tropical forests at both the international and the national level is more and more fragmented because of the large constellation of actors, ideas and interests influencing forestland policies for their conservation or change. In public policy area, fragmentation is to some extent the result of competing interests and objectives that lead to a power play in policy-making between actor groups (both public and private), i.e., state bureaucracies, Intergovernmental organisations, nongovernmental organisations and private companies.

In this power relationship for the control of tropical forestlands, the hegemony of state bureaucracies in forest governance processes is increasingly contested because of the growing influence of external actor groups in forest governance. Our findings show that the fragmentation of forest governance, which might be considered specific to pluralistic systems, became banal even in tropical countries with a state-centred system like Cameroon where the state claims hegemonic ownership of forestlands. This fragmentation is particularly reinforced in limited statehood where state bureaucracies are attracted to/dependent on external resources for dealing with weak institutional capacity and to face the government's lack of ability to supply public goods and services.

But despite the governance fragmentation constraints, this article reveals that some governments and sectoral bureaucracies in limited statehood are capable of using cunning behaviours to secure their own interests in domestic forestland policies and avoid pressure from external actors. In the case of Cameroon for example, the strategy being used relies on a wait-and-see game, uncertainty and recourse to sudden, ambiguous decisions; this is what we call “gecko politics”. Broadly, this article seeks to understand how a government or state bureaucracy in limited statehood with a state-centred system can try to impose its own interests in the context of forest governance fragmentation?