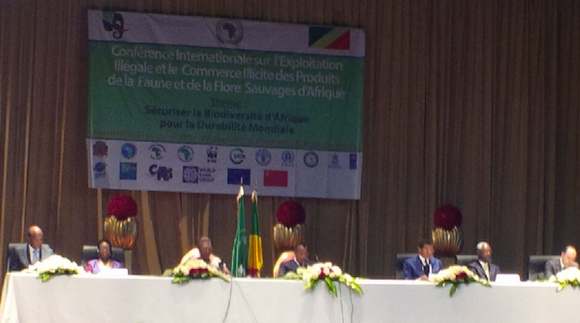 Brazzaville, Congo, May 2015—African leaders meeting last week in Brazzaville issued a strong Declaration urging co-ordinated regional and international action against wildlife crime at the end of a four-day meeting on illegal exploitation and illicit trade in African wildlife products.

The 20 points Declaration urges African States to finalize the Draft ‘African Common Strategy on Combatting Illegal Trade in Wild Fauna and Flora’ and its action plan to deal with the crisis. The meeting made significant progress in the development of the African Common Strategy, which will be finalized and submitted for adoption to the African Union (AU) later this year. The conference also recommended African States to take leadership at the United Nations General Assembly (UNGA) in introducing a Resolution on Wildlife Crime with a strong reporting mechanism.

The Declaration also encourages AU Member States to recognize the rights and increase the participation of Indigenous Peoples and local communities in planning, management, and use of wildlife resources, and also to build their capacities to fight against wildlife crime. It further requests the AU to work with transit and consumer countries and develop joint actions to reduce and eventually eliminate supply, demand, and trade in the illegal wild flora and fauna products in Africa. Finally, the declaration calls partners to provide the necessary technical, financial and logistical support in the implementation, reporting, and monitoring and evaluation of the African Common Strategy and action plan.

The Declaration itself builds on outcomes agreed at previous international conferences on wildlife crime and illegal wildlife trade, including those of the Elysée Summit on Peace and Security in Africa (December 2013, Paris, France), at the two Conferences on Illegal Wildlife Trade (February 2014, London, UK and the follow-up meeting in end March 2015 at Kasane, Botswana), the African Ministerial Conference on the Environment (AMCEN, in early March, Cairo, Egypt), with a strong focus on Africa-specific challenges and responses. [Download EN version] [Download FR version]

“Africa’s wild fauna and flora is seriously affected and depleted by the increase in poaching and illegal trade. It is good to note and experience the unanimous and firm commitment demonstrated today by African leaders to stop this trend, which is also a serious impediment to development in the region,” said Roland Melisch, TRAFFIC’s Senior Director for Africa and Europe…