Accreditation Services International (ASI) at work in the Congo Basin: Forest Stewardship Council (FSC) Mobilizes for a Meeting on ASI in Douala 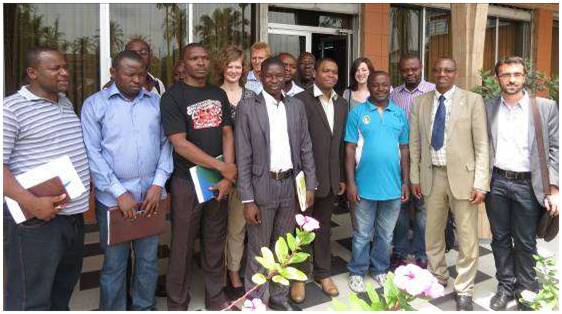 The meeting was opened to all interested stakeholders and partners (financial partners, public institutions, the private sector, the civil society, research institutes, training institutions, students, the press, etc.) who were present in Douala after the meeting organized by the CBFP Facilitation. International organizations, NGOs and logging companies attended deliberations.

It was also attended by representatives of the press involved in environmental issues from the public and private sectors. The meeting was attended by 31 persons opportune to exchange on forest management and certification issues over the world in general and in the Congo Basin in particular.

Specifically, this meeting enabled participants to get precise information on:

2. The role of the various organs involved in these processes, including the certification Bureau, ASI, FSC-International Center, certification Offices and concerned enterprises;

The meeting was marked by three presentations followed by a Q&A session, discussions and the closing session.

After recalling the objective of the meeting and expressing the wish for participants to actively involve in discussions, Elie Hakizumwami, the Regional Director of FSC Africa, made an introductory presentation on the history, the mission and the tools used for the implementation of FSC mission, decision-making in a consensual and a democratic manner, market mechanism, responsible forest management standards and policy, etc. He then reviewed the progress achieved in the framework of FSC certification in Africa, with special emphasis on the Congo Basin. He pointed out that the Congo Basin covers 32% of FSC certified tropical forests in the world, and over 70% FSC certified forests in Africa. He also recalled the role of the State and the private sector in certification. At world level, 54% of FSC certified forests belong to the State; however the private sector holds more than 50% of certificates due to the fact that some state forests are managed as concessions by private entities as it is the case in the Congo Basin. Elie also explained the role of FSC in the certification process.

The second presentation was made by Jervais NKOULOU, the coordinator of SmartWood, a certification entity of Rainforest Alliance for Africa. His exposé was on the forest certification process from beginning to the award of the certificate. He made a short introduction of his institution which has so far certified over 45 million hectares of forest over the world under FSC referential. It is thus the first FSC certification office in the world.

♦ Certification in Africa: some reminders (forest management and legality certification) by Elie Hakizumwami and Jervais Nkoulou of Smartwood programme,