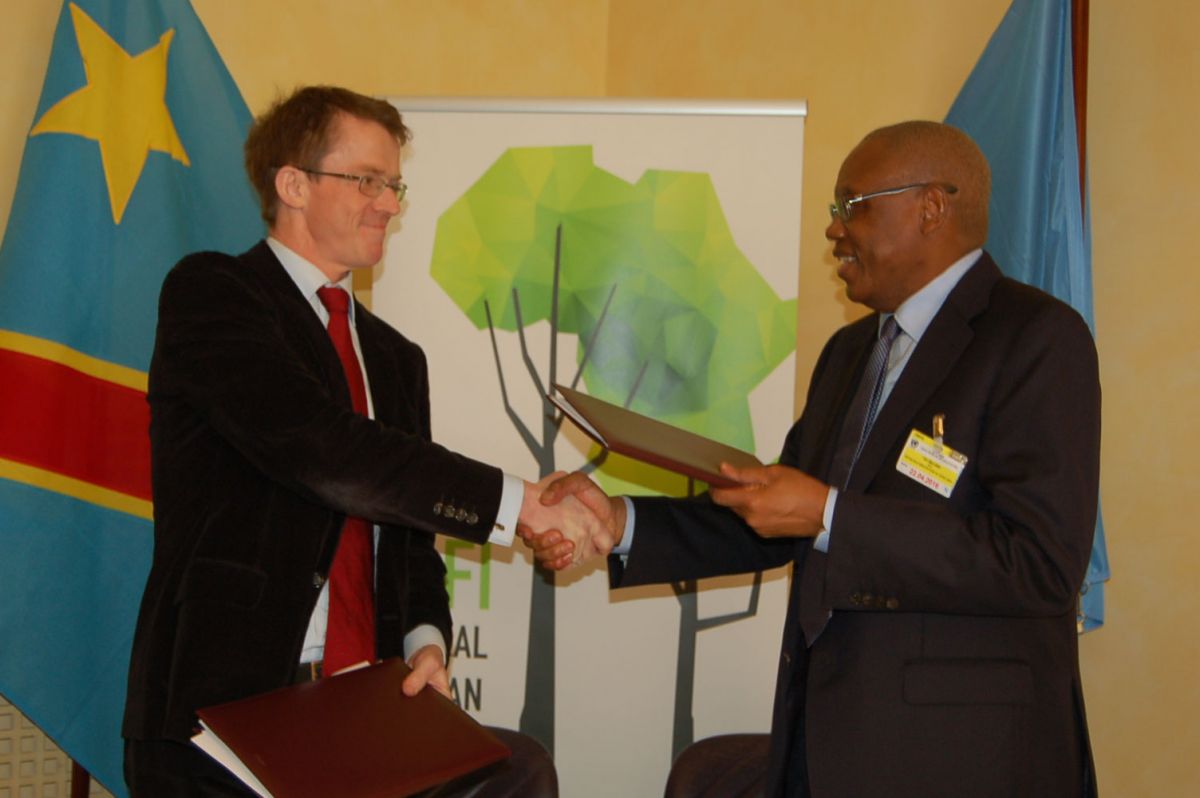 Geneva - April 22, 2016 - The Central African Forest Initiative (CAFI) and the Minister of Finance of the DR Congo today signed a letter of intent (LOI) for 200 million US dollars to address deforestation and forest degradation in the country and to promote sustainable development.

The LOI addresses factors contributing to the loss of forests in DRC, including agricultural expansion, the use of fuelwood, illegal logging, land-use planning, unsecure tenure, demographic pressure and oil and mining activities. The governance issues that often underpin these drivers are largely integrated.

The signing coincides with today’s world leaders’ signing ceremony in New York for the historic climate agreement reached in Paris in December. The LOI exemplifies the partnerships needed to reach the ambitious climate change mitigation goals set out by the Paris Agreement, and is a further step in recognition of the 2014 NY Declaration on Forests.  Today also marks International Mother Earth Day on the global theme trees for the Earth.

This LOI is the first signed between CAFI and a country of the Central Africa region, and the largest one ever concluded on REDD+ in Africa. Reducing Emissions from Deforestation and Forest Degradation (REDD) is an effort to create a financial value for the carbon stored in forests, offering incentives for developing countries to reduce emissions from forested lands and invest in low-carbon paths to sustainable development.

Home to the second largest tropical forest in the world, today’s signing marks another milestone in DRC’s ongoing efforts on REDD+ since 2009, with the support of UN REDD, the World Bank and UNDP. Indeed, the basis of the LOI is the DRC framework REDD+ strategy and its REDD+ investment plan.

Henri Yav Mulang, Minister of Finance of DRC, said “Home to 155 million ha of forests, DRC has a long way to go on its development path to become an emerging economy and provide decent living standards to its citizens. Our National REDD+ Strategy puts the preservation of our forest at the heart of our economic and human development. We aim at developing our productive sectors, while mitigating their impact on forests. And we need strong support from the international community to achieve this and reach the right trade-offs. We therefore very much welcome the signing of this LOI with CAFI which paves the way for a long-term partnership and will help us moving towards concrete reforms and action on the ground”.

The key elements of the agreement are; eight major outcomes, reflecting the cross-sectoral nature of the issues at stake to end forest loss in DRC; policy-level commitments combined with more technical objectives; and an emphasis on transparent processes and engagement of stakeholders.

The 200 US$ million support will be given in two tranches, the second upon verification of a number of milestones.

Vidar Helgesen, Norway's Minister of Climate and Environment said “This Letter of Intent should be thought of as a compass. It sets the ambitious direction that DRC will take in order to avoid the kind of industrial deforestation that we have witnessed in other parts of the world. We will meet challenges of implementation, but if we stay faithful to the spirit of the Letter of Intent, we will make progress”.

This first agreement between CAFI and the DRC has been reached in just seven months since CAFI was launched during the 2015 United Nations General Assembly in New York, as a collaborative partnership between a coalition of willing donors (The European Union, Germany, Norway, France and the United Kingdom), six Central African Partner Countries (Central African Republic, Cameroon, the Democratic Republic of the Congo, the Equatorial Guinea, Gabon and the Republic of Congo), and Brazil as South-South partner. It is rooted in the Joint Declaration of Intent on REDD+ in the Congo Basin that Central Africa’s nations and most REDD+ donors signed at the Durban climate summit in 2011, aiming to advance forest governance and climate finance in the region. CAFI's goals are to recognize and preserve the value of the forests in the region to mitigate climate change, reduce poverty, and contribute to sustainable development.