UICN: Advocacy for the Safeguarding of Flagship Wildlife Species: The Chadian Ambassador to Cameroon Supports UICN 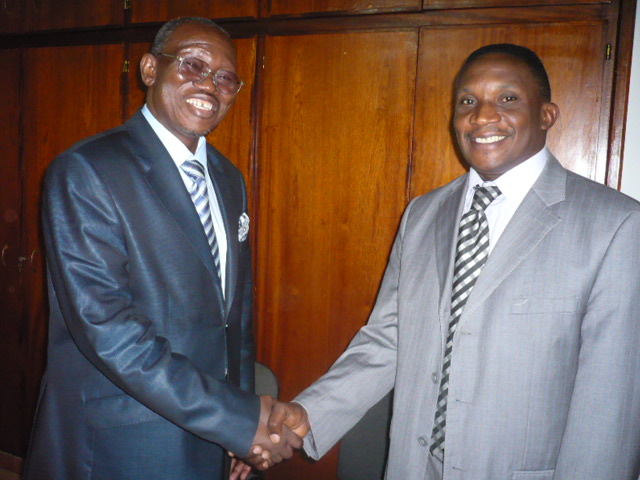 Chadian Ambassador to Cameroon, Dean of the Diplomatic Corps, Mr. Yoosem-Kontou Noudjiamlao, visited UICN Cameroon Programme (CP) on 18 April 2013. Although presented as a courtesy visit, it had the dual objectives of promoting the institution by visiting its facilities, and exchanging with the serving team on the issue of poaching and subsequent efforts to safeguard flagship wildlife species in the Chad, Cameroon and Central African (CAR) trans-border area.

In fact, this visit was preceded on the previous day by the emergency meeting (held from 21 to 23 March 2013 in Yaounde, Cameroon) of ministers of the Economic Community of Central African States (ECCAS) during which the PEXULAB (Anti-Poaching Extreme Emergency Plan) for elephants in the Central African Northern region (Cameroon, CAR and Chad), and a Ministers’ Declaration. This visit also occurred after the visit of the UICN Cameroon Office in March 2013, by ECCAS goodwill Ambassador, the former international footballer Mr. PATRICK MBOMA.

It also marks the acknowledgement of UICN’s efforts in its relentless efforts against wildlife criminality, which is just starting. UICN pledged, through a declaration with its partners, MIKE and TRAFFIC, to support the implementation of ECCAS' plan of action in this area.

Thus, after a brief presentation of UICN to the ambassador, accompanied by his Chargé d’Affaires, the issue of conserving flagship wildlife species was exposed and discussed, especially the actions initiated following the adoption of PEXULAB. The presence of UICN in Chad through trans-border projects on transhumance, the newly installed team in Pala working on the sustainable management of natural resources in the Sena Oura national park and its environs, the conventions for collaboration with CBLT and CEBEVIRHA, were appreciated and constitute an opportunity to reinforce conservation efforts in this trans-border zone.

In this same line, His Excellency, Mr. Yoosem-Kontou Noudjiamlao reiterated his support to UICN for the actions carried out in the trans-border zone, and especially in Chad, in the following domains, among others:

♦ Mobilization of the diplomatic corps to support anti-poaching emergency actions

♦ Organization of a charity football match between the Indomitable Lions of Cameroon and the SAO of Chad (awareness, fund raising, etc.) with the support of the Goodwill Ambassador;

♦ Organization of a high level meeting in Chad for the implementation of the tripartite under signature;

♦ Facilitation of the signature of a framework agreement between UICN and the Chadian Supervising Ministry;

♦ Lobbying with strategic partners such as the EU;

♦ Advocacy for Chad to join UICN as a member

At the end of the visit, the Ambassador congratulated UICN for its effective commitment to anti-poaching efforts. While highlighting the importance of trans-border cooperation, and the need for the three countries to act together, he wished that ECCAS plan of action would not remain in coffers.

The visit ended with a widely broadcast interview granted by UICN prestigious guest to Radio Environnement.