UE-Larger than Elephants: Inputs for an EU Strategic Approach to Wildlife Conservation in Africa - Regional Analysis 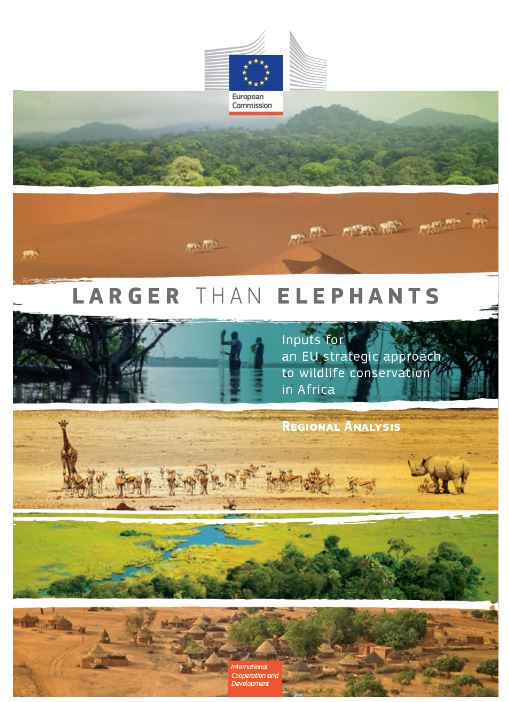 Larger than Elephants - Regional Analysis sets out the scale of the crisis that Africa faces due to the threat to ecosystems, natural resources and wildlife. It examines lessons learnt from past conservation efforts and identifies priority areas for future action. It has been produced in close concertation with the conservation community and Africa specialists. This full Regional Analysis follows a Synthesis report published in 2015.

Section 1 describes the main natural habitats and ecosystems of Southern Africa and the status of elephant, rhino and other large mammals in the region – which is uneven but favourable overall by comparison to other regions. It describes the Miombo woodlands and forests, rivers, flooded grasslands, floodplains and other wetlands of the region and their current status.

Section 2 reviews long-term threats to the region’s wildlife, including the rising demand for land (arising from the growth in human population), the fencing of grasslands, and the demand for ivory and rhino horn. The different threats bringing about wildlife decline are categorised as (a) proximate drivers – loss of habitat, illegal killing, failure of protected areas, (b) ultimate drivers – human population growth, international demand for resources, and climate change, and (c) social drivers – rural poverty, political indifference, agricultural subsidies, underfunding of protected areas. Proximate drivers are where much conservation work is currently focused; ultimate drivers are not amenable to change; social drivers are difficult to change but key to the longterm future of African wildlife. One of the main social drivers is the lack of a conservation policy that is embedded in African society. This section also introduces mammal migrations and the Afro-Palaearctic bird migrations that occur in the region and their special conservation requirements…