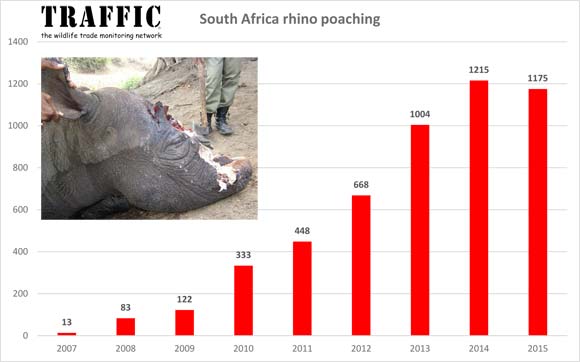 Johannesburg, South Africa, 21st January 2016—South Africa today announced the official number of rhinos illegally killed in the country during 2015. The figure of 1,175 represents a slight drop on the 1,215 record total in 2014, but overall rhino poaching figures for Africa total a record high for the continent.

“While a slight decrease in rhino poaching in South Africa was apparent in 2015, and perhaps the authorities are having some impact on the ground, these numbers are hardly cause for celebration or complacency,” said Sabri Zain, TRAFFIC’s Director of Policy. “The figures remain unacceptably high and continent-wide the scale of the rhino poaching crisis is spreading.”

The 2015 decrease in South Africa has been more than offset by significant increases in neighbouring Zimbabwe, where rhino poaching rose from 12 in 2014 to a widely reported total of “at least 50” last year, while losses in Namibia also rose sharply from 24 in 2014 to 80 in 2015.

According to TRAFFIC data, Africa-wide rhino poaching totals reached 1,299 animals in 2014. The latest figure from South Africa means the continent-wide total in 2015 was at least 1,305.

“For Africa as a whole, this is the worst year in decades for rhino poaching,” said Tom Milliken, TRAFFIC’s Rhino Expert. “The poaching epicentre has spread to neighbouring Namibia and Zimbabwe, but is nowhere near being extinguished in South Africa: despite some commendable efforts being made, we’re still a very long way from seeing the light at the end of this very dark tunnel.”

Of the four major rhino range States, only Kenya is expected to report a significant fall in rhino poaching in 2015.

Last week, a number of rhino conservation measures were agreed during the 66th Standing Committee of the Convention on International Trade in Endangered Species of Wild Fauna and Flora (CITES).