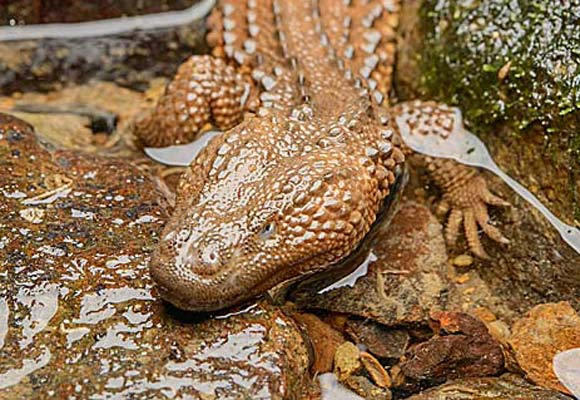 Jakarta, Indonesia, October 2015—A German national has been arrested at Soekarno-Hatta International Airport in possession of eight Earless Monitor Lizards concealed on his body as he attempted to smuggle them out of Jakarta, Indonesia.  One of the lizards had already perished.

The arrest took place on 11th October, just over a year after TRAFFIC warned of the emerging global trade in Borneo’s remarkable subterranean lizard.

A German connection to the trade in Earless Monitor Lizards Lanthanotus borneensis already exists. In July 2015, a USA-based trader selling the species claimed the animals had been imported from Germany and captive-bred there—presumably to circumvent the US Lacey Act.

However, none of the range countries has permitted the export of this species, so parent stock in any breeding facilities has not been legally obtained. As this latest case demonstrates, animals are still being sourced from the wild.

“International investigations are essential to debunk the myth that reptiles are being ‘captive bred’, whereas in reality claims of captive breeding are frequently used as a cover to enable the animals to be traded internationally, unchallenged,” said Sarah Stoner, TRAFFIC’s Senior Wildlife Crime Analyst.

Although protected in all three of its known and potential range States—Brunei Darussalam, Indonesia and Malaysia—once Earless Monitor Lizards have been illegally removed from the wild and smuggled out of their range, no legislation is currently in place to protect them adequately from exploitation on the international market.

The Malaysian Government is behind moves to secure the listing of Earless Monitor Lizards in Appendix I of the Convention on International Trade in Endangered Species of Wild Fauna and Flora (CITES), which would ban all commercial international trade in the species…