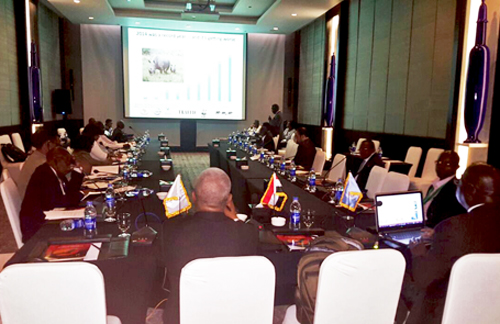 Cairo, Egypt, 20th April – Faced with unprecedented levels of poaching and wildlife trafficking, African countries this week at the African Ministerial Conference on the Environment (AMCEN) in Cairo agreed to take bold new steps to implement a continent-wide strategy to combat the illegal wildlife trade.

Ministers adopted an implementation roadmap with an action-oriented matrix for the ‘African Common Strategy on Combatting Illegal Exploitation and Trade in Wild Fauna and Flora in Africa’ at AMCEN, together with next steps to ensure its effective implementation.

“This concrete plan to implement the African strategy against illegal wildlife trade is a significant step towards ending the continent’s poaching and wildlife trafficking crisis,” said TRAFFIC’s Senior Director for Africa and Europe, Roland Melisch. “We encourage all African Union (AU) Member States and partners to take immediate steps at the national-level in line with this plan – and so help catalyse transformative continental and global action.”

Developed following an international conference on the illegal wildlife trade in Brazzaville in April 2015, the common strategy was endorsed by the AU’s Executive Council during its 27th ordinary session in Johannesburg in June.

Agreement on the implementation plan was reached at a consultative meeting in Addis Ababa last month, which was convened by the AU Commission and involved experts from member states, International Consortium on Combating Wildlife Crime (ICCWC) partners, other UN agencies, and international and regional conservation organisations.

“Africa’s vultures are on the edge of extinction directly and indirectly due to poisoning related to ivory poaching and traditional medicine trade” said Ken Mwathe the Policy and Advocacy Manager at the BirdLife International Africa Office.  “BirdLife is encouraged by the level of commitment and support that has been shown by African countries, whose people crucially depend on vultures to stop the spread of disease.  The plan will ensure coordinated regional action against wildlife crime on the African continent”.

“Implementing the common African strategy is critical since no country can hope to tackle wildlife crime on its own,” said Elisabeth McLellan, WWF Head, Wildlife Crime Initiative. “There has never been so much high level political momentum in Africa to tackle transnational organised wildlife crime: now there is a plan to turn this into action.”