TRAFFIC-Vital evidence goes up in smoke 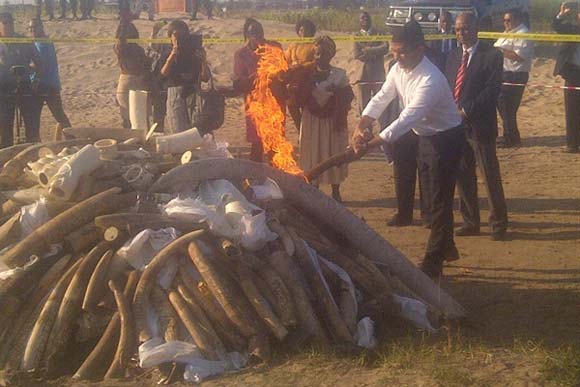 The products incinerated are believed to have included the 1.1 tonnes of elephant ivory and the remaining rhino horns out of 65 seized in May in Matola, Mozambique, the largest horn seizure to date during the current rhino poaching crisis.

Several of the 65 horns were subsequently stolen from a police warehouse, with at least 7 suspects, four of them police officers, arrested in connection with the theft.

However, it is unclear whether DNA samples following CITES (Convention on International Trade in Endangered Species of Wild Fauna and Flora) protocols were taken from the remaining rhino horns before they were destroyed, although an independent audit of the materials burned is understood to have taken place.

Cases against those arrested in association with the seizure of the 65 horns and in the subsequent theft of 12 of them are still awaiting completion, with the primary suspect in the original seizure reported to have absconded.

“The apparent destruction of evidence in ongoing cases raises obvious concerns over how the legal process will now be properly followed in Mozambique,” said Tom Milliken, TRAFFIC’s rhino and elephant expert.

“In fact, Mozambique’s recent mega-seizure of rhino horns and elephant ivory has basically unfolded as a textbook case of legal unprofessionalism.”