TRAFFIC-MINFOF: The fight against illegal logging and the related trade was the focus of a workshop organized in Douala

TRAFFIC and the Ministry of Forestry and Wildlife in Cameroon officially launch the capacity building phase for beneficiaries as part of the implementation of the “Strengthening the national process for controlling illegal logging and the associated trade in Cameroon” project. 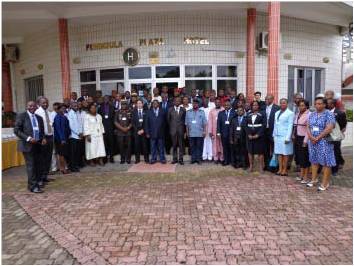 Douala (Cameroon), 27-28 November 2012 - A workshop was held on “Strengthening of the national process for controlling illegal logging and the related trade in Cameroon”. The workshop, held under the auspices of His Excellency the Prime Minister, Head of Government, was jointly organized by TRAFFIC Central Africa and the Ministry of Forestry and Wildlife (MINFOF).

Attendees included officials from central and external services of the Ministry of Forestry and Wildlife (MINFOF), chiefly those involved in forest law enforcement; officials of the Ministry of Justice of Central African countries (Cameroon, Congo, Gabon, CAR and DRC); various national forces of law and order and development partners. Equally in attendance were the National Forestry Development Agency (ANAFOR), the Independent Observer, the Network of Forestry and Environmental Training Institutions (RIFFEAC), the Chamber of Agriculture, Fisheries and Forest and representatives of civil society and the private sector.

The workshop had  five objectives, namely : (1) officially launch capacity building of beneficiaries as part of the implementation of the “strengthening the national process for controlling illegal logging and the associated trade in Cameroon” project and discuss the project with the entire community of development partners working in Cameroon and a few neighboring countries, those countries that were invited to take part in the workshop ; (2) introduce the training modules on strengthening of forest law enforcement ; (3) present the progress status of the study on timber flows and trade routes in Cameroon ; (4) examine the feasibility of setting up  an  expert group to ease enforcement of forest regulations ; (5) identify, mobilise and capitalise national expertise to build capacities of national staff involved in the forest logging and timber trade Chain of Custody in Cameroon.

Following two days of intense and fruitful deliberations, participants met in a plenary session during which they discussed and adopted a set of 11 recommendations to be implemented in 2013. They included among others: completing the Establishment of the Timber Traceability System in Cameroon (STBC/VPA), set up joint check points at the entrance of major cities  by MINFOF in collaboration with other forest control actors (Police, Gendarmerie, Finance..); MINFOF should foster the establishment of rural radio stations to circulate forestry information and harmonize ecological monitoring of wildlife species ; MINFOF should upgrade the status of forestry enforcement officers; MINFOF should restrict forest transactions, where they are not banned.

The recommendations captured three major observations/considerations: (1) for greater efficiency in combating the plundering of forest resources, envisaged training programs must engage universities and institutions of higher learning which are populated by the youth,  who are the future of our countries (2) Effective coordination between administrations concerned with forest law enforcement (MINFOF, Justice, Finance, Police, Gendarmerie, etc.) must be established in keeping with the four ‘R’  principle, that is: defining the Roles and Responsibilities of each party, evaluating the Resources needed to maintain an appropriate Relationship that would be conducive to achieving the expected results. (3) the need to incorporate into the law being reviewed, the procedure for referral of other forestry enforcement actors by Forestry Administration.