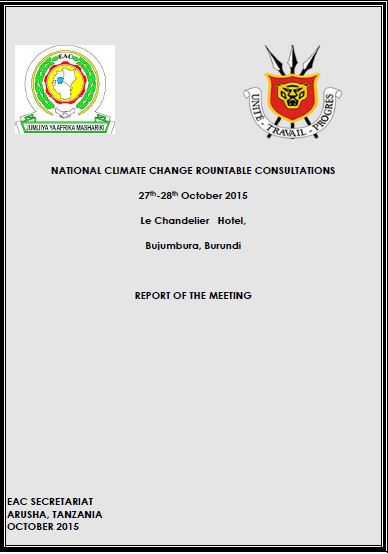 The National Climate Change Roundtable Consultative Meeting for the Republic of Burundi was held in Bujumbura from 27th – 28th October 2015. The Meeting was hosted by the Government of Burundi through the Ministry of East African Affairs in collaboration with the EAC Secretariat.

The overall objective of the National Climate Change Consultations was to identify national change priorities with a view of preparing for effective participation at forthcoming 21st Conference of Parties to the United Nations Framework Convention on Climate Change which also serve as the 11th Meeting of Parties to the Kyoto Protocol (COP21/CMP11) scheduled to take place from 30th November -11th December 2015 in Paris, France. The specific objectives of the consultations were:

The Meeting was supported by the Programme on Planning for Resilience in East Africa through Policy, Adaptation, Research, and Economic Development (PREPARED) under the Department of Environment and Natural Resources, the EAC Secretariat.