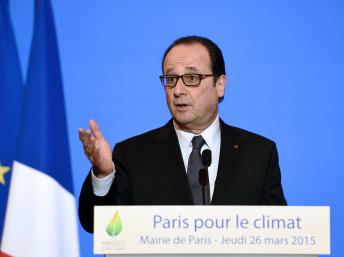 There will be no agreement at the international climate conference in Paris in December if industrialised countries do not pay the 100 billion euros needed annually to finance the transition to renewable energy in developing countries, French President Francois Hollande said Tuesday.

"If we are to succeed in Paris it will require not only political commitment, but also financing," he said in a speech to French ambassadors meeting in Paris.

The pledge to raise that amount of money annually by 2020 “was a promise that already has not been kept,” Hollande said. “It is now a requirement. Without 100 billion, there will be no deal in Paris.”

He said the sum is “indispensable” to help poorer nations cope with extreme weather and rising seas, and to develop their economies cleanly - as promised by rich governments in 2009.

Group of Seven leaders were criticised in June for their failure to outline a clear path for increasing climate aid up to 2020, from the current level of around 30 billion euros per year……