The 13th World Wetlands Day was celebrated on Tuesday February 2nd, 2010. To mark this year's World Wetlands Day, the government of the Republic of Cameroon has designated its portion of Lake Chad (12,500 hectares, 12°46'N 014°19'E) as protected Ramsar sites, fulfilling an agreement made a decade ago by the four nations that share Lac Chad - Cameroon, Niger, Chad and Nigeria. Cameroon's announcement will also clear the way for Lake Chad to become the largest of the world's few recognized trans-boundary international wetlands, where countries make a formal agreement for joint protection and management of shared aquatic ecosystems and their resources. Lake Chad is the remnant of a much vaster lake known as Mega-Chad which 22,000 years ago drained a greener Sahara and was three times the size of Lake Victoria, now Africa's largest lake. It is now the focal point of life in a huge expanse of arid Sahelian Africa. Technically best described as an inland delta, the new internationally protected wetland covers 2.6 million hectares vital to countless birds as well as endangered otters, gazelles and elephants. The Lake is also home to hippopotamuses and Nile Crocodiles. 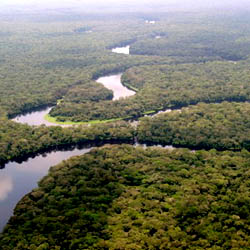 Instituted in 1997, the World Wetlands Day celebration in central Africa provided an opportunity to inform and sensitize governments, local communities, civil society on values, functions and importance of these highly rich ecosystems, and their benefits in maintaining healthy climate and environmental, and biodiversity (Photograph on the left: gaboneco.com). This year's theme, Wetlands, Biodiversity and Climate Change, with the slogan "Caring for wetlands: an answer to climate change", captures the sense of urgency we all feel about the need to address the potentially disastrous consequences of global climate change as quickly as possible, particularly in the wake of the Copenhagen meeting of the UNFCCC back in December, and it emphasizes our belief that the role of wetlands in mitigating and adapting to the effects of climate change must be central in all future debates about the way forward. Our colorful leaflet lays out many of the ways in which anticipated climate change may affect the health and productivity of the world's wetlands, and it identifies some of the ways in which healthy wetlands contribute very significantly to potential solutions.

The importance of wetlands extends far beyond biological protection to include hydrological buffers, economic and essential human importance. They serve as sponges that regulate local and global climate by acting as carbon sinks. They regulate river drainage flow by absorbing excess water during wet periods and then releasing that water during dry periods. They also break the power of floods, thereby protecting developments along river banks. Wetland vegetation purifies water by absorbing silt and pollutants. Wetlands are being degraded by damming, afforestation (exotic plantations require vast amounts of water), removal of plants and drainage of wetlands for developments, industries pumping waste water into them, and seepage of agricultural residues.