PowerPoint on Threats and Conservation of Central Africa's Pangolins.pdf (3.2 MiB)

On October 24, 2017, the U.S. Fish and Wildlife Service (USFWS) and the MENTOR-POP (Progress on Pangolins) program co-hosted the second Congo Basin Forest Partnership (CBFP) technical roundtable discussion on Pangolin Conservation in Central Africa. Here, Francis Nchembi Tarla and Ichu Ichu Godwill of MENTOR-POP reflect on the experience and summarize priorities for next steps.

Two years ago, when the first CBFP roundtable discussion on Central African pangolins took place, we knew that pangolins were considered the most heavily trafficked mammals in the world, with an estimated one million pangolins trafficked over a recent decade. Within Central Africa, we were seeing signs that the demand for pangolin meat and scales was becoming increasingly unsustainable. At the time, Central Africa’s pangolins had yet to “find their voice” in international, sub-regional, and even national arenas. Very little was known about the status of our four pangolin species in the wild, and apart from some efforts to protect the giant ground pangolin, they had few advocates and had not yet become a conservation priority.

Over the past two years, this has changed. The second roundtable discussion on Central Africa’s pangolins, held at the CBFP meeting in Douala last month, confirmed the urgency of threats to our pangolins. It provided an opportunity to discuss updates and future plans for pangolin conservation in different countries across the sub-region. Perhaps most importantly, it gave us a chance to reflect back and take pride in and feel hopeful about the conservation leadership for pangolins that has started to emerge in Central Africa, and to map out some priority actions for the immediate future. 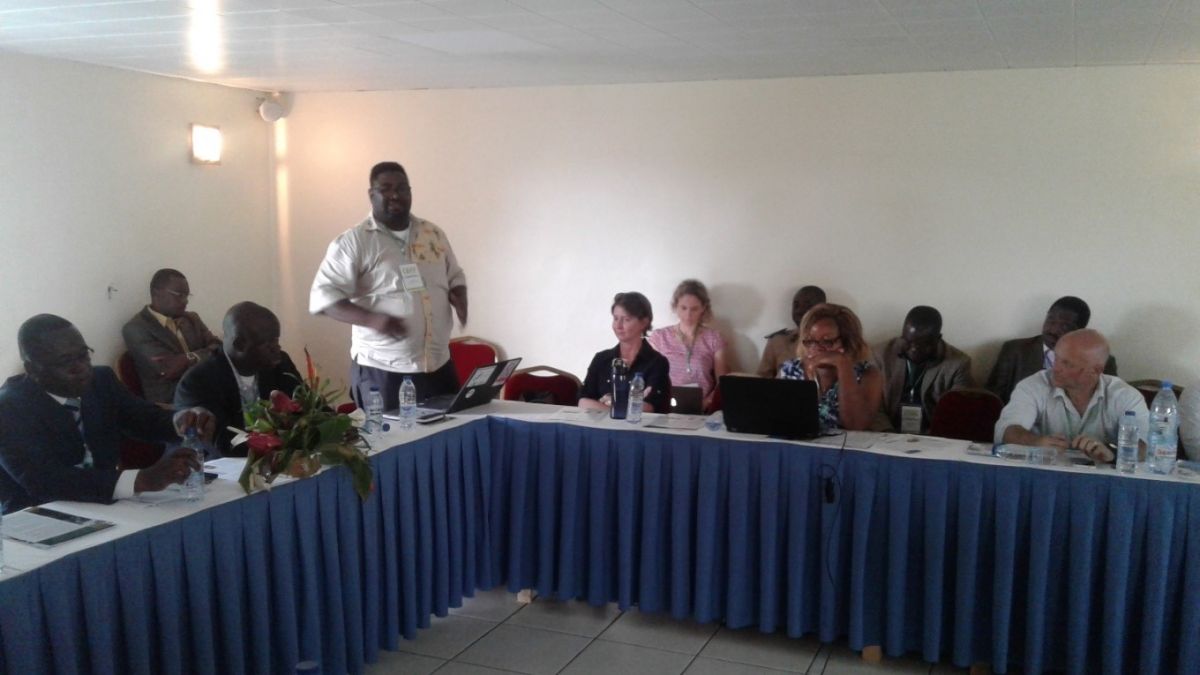 Fifty participants from ten countries attended this roundtable – more than a 40 percent increase in attendance from the first one. What stood out more than numbers, though, was a new level of awareness, expertise, and political will in the room on matters related to Central Africa’s pangolins.

The roundtable provided a unique opportunity for these diverse partners to share their successes and struggles and foster future collaborations. Discussions around the table revealed that many organizations are developing projects addressing threats to pangolins, including TRAFFIC, the Zoological Society of London (ZSL), World Wildlife Fund (WWF), Wildlife Conservation Society (WCS), and others.

It also provided a chance to see how countries were adapting national legislation to reflect the commercial trade ban in pangolins and their parts that went into effect with the recent uplisting of all pangolin species to Appendix I of the Convention on International Trade in Endangered Species of Wild Fauna and Flora (CITES).

In Cameroon, national legislation has been updated to reflect this CITES uplisting, and the commercial trade ban in pangolins and pangolin parts is now being actively enforced. The Director of Wildlife and Protected Areas of Cameroon’s Ministry of Forestry and Wildlife (MINFOF) informed participants about this during his keynote speech. He implored other countries to update their national legislation and improve law enforcement efforts to ensure increased protection of pangolins, given their CITES Appendix I status. He encouraged increased national and international collaboration between stakeholders to crack down on the illegal trade in pangolins and pangolin scales. Last but not least, he drew attention to Cameroon’s pangolin scale burn, held on the eve of World Pangolin Day 2017, which was the first of its kind in the world. He called on other countries and organizations to collaborate with Cameroon and emulate Cameroon’s example, sending a strong signal that the trafficking of pangolins and pangolin scales will no longer be tolerated across the sub-region.

The stakes are high.

One of the co-authors of a recent publication on pangolins revealed during the discussion that up to 2.7 million pangolins might be hunted annually in Central Africa alone – many more than previously thought.

Other participants raised concern that the number and quantity of pangolin seizures have been increasing recently, possibly as a result of increased law enforcement, or because traffickers are taking advantage of weak national laws to make gains before these laws are tightened.

Even when seizures of pangolins and pangolin scales occur, the cases are often not sent to court, and of those that are, few go through a successful trial.

We know that traffickers are taking advantage of these gaps and weaknesses, and that it is critical for us to act now. The discussion revealed several priority actions:

We welcome your support on these matters. In particular, please stay tuned for updates on World Pangolin Day 2018, where we hope we can count on you to be a part of our efforts to be a voice for Central Africa’s pangolins.

PowerPoint on Threats and Conservation of Central Africa's Pangolins.pdf (3.2 MiB)