6th CBFP plenary meeting: Canada to take over facilitation in 2010

Yaoundé, 11 and 12 November 2009 - the conclusions drawn by the outgoing facilitator were marked by the unanimity of all members who attended this 6th statutory meeting of the Congo Basin Forest Partnership on November 11 and 12 at the Palais des Congrès in Yaoundé. "Mindful that we have come to the end of two days of enriching and gratifying discussions and that Canada is getting ready to take over the facilitation with the support of the German facilitation and that of all other members of the CBFP, we all go home with a feeling of optimism"

The forms of dialogue offered to participants gave rise to structured thematic workshops and a very enlivened poster session, which transformed the sometimes virtual images of the platform into real encounters. Hans Schipulle did not fail to underline the presence of Ministers in charge of forests of Central Africa and their dedicated participation in the workshops. "This obvious will on the part of political leaders to frame the debate of stakeholders in the forest sector of the Congo Basin constitutes the core of a partnership that aims at supporting an intergovernmental process." 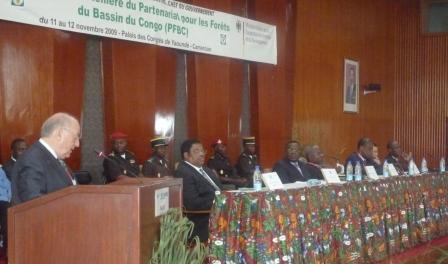 The Facilitator, Hans Schipulle giving his introductory talk during the opening ceremony at the Palais des Congrès.

The deliberations at the plenary meeting were certainly enhanced by the presence of Emmanuel BIZOT, Minister in charge of forest of CAR and current President of the COMIFAC; Elvis NGOLLE NGOLLE, Minister of Forests and Wildlife of Cameroon; José E.B. ENDUNDO, Minister in charge of Environment, Nature Conservation and Tourism of DR Congo; and Henri DJOMBO, Minister of forest economy of Congo. These four Ministers had by the way, accepted the suggestion of the facilitator to chair and to enliven the workshops conceived following the major priorities areas of the roadmap of the German facilitation. Having organized in four groups, the participants treated subjects relating to the institutional strengthening of the COMIFAC, governance and framework conditions in Congo Basin countries and the equitable implementation of the Convergence Plan. A fourth workshop addressed the issue of reconciling conservation with sustainable exploitation by the example of the Sangha Tri-National Park, in order to enhance the knowledge of members of the CBFP on this controversial issue. Equally present at the talks were François NAOUYAMA, Minister of the Environment and Ecology of CAR, and Nana ABOBAKAR, Minister Delegate in charge of the Environment Nature Protection of Cameroon. In all, some three hundred participants rallied to promote, move forward and to strengthen the objectives of the partnership.

The plenary sessions were dedicated to the presentation of the general reports of the ES of COMIFAC, of the Facilitation of the CBFP and of the "State of the Forests 2008" that was published in September 2009. The affluence of propositions made by all participants, who had expressed their wish to present and share their programs with other CBFP members led to the conception of the memorable poster session. Samuel Makon, the Facilitator Delegate, on reading the conclusions reminded participants that true interchange generally takes place in informal settings, in hallways. Therefore, why not adjust the hallways in order to place communication tools at the disposal of participants, to fuel spontaneous encounters? "The Facilitation prides itself on the very positive feedback that the organization of the CBFP Lounge has roused and thanks all partners who took part in the exercise." 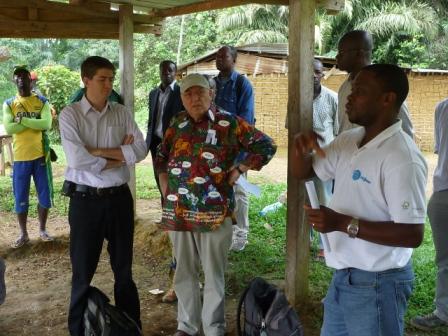 The Facilitator and the Representative of the German Ministry, Daniel HAAS, listen to the explanations of the delegate of Wijma - Company.

Besides the program proper of the meeting, the Facilitation and Cameroon's Ministry of Forests and Wildlife gave participants the opportunity to take part in an excursion to a managed forest concession of Wijma - Company in Ma'an on the outskirts of Ebolowa. Another group of participants visited the Nationalark of Mfou, a gorilla sanctuary. Through the two visits participants were able to appreciate these two modes of forest management that the CBFP is fostering in the countries of the Congo Basin, and to benefit from a relaxed atmosphere in the presence of experts from forest management and wildlife conservation.

For more details, view the plenary meeting's documentation (in French).

What the Press said:

"The countries of Central Africa are becoming more and more conscious of the necessity of a regional strategy: at less than a month from the climate change negotiations in Copenhagen, members of the Congo Basin Forest Partnership have gathered in Yaoundé among other things to discuss issue pertaining to the financing of forest areas" (Television News; 16/11 at 8:10)

"Opening of the 6th plenary meeting of the Congo Basin Forest Partnership in Yaoundé" (New China, 12/11)