OFAC: The State of the Forests in the Congo Basin 2008 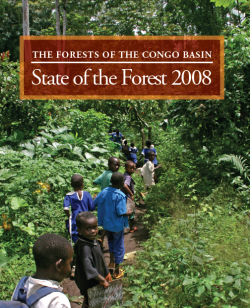 The Observatory for the Forests of Central Africa (OFAC), an initiative of several members of the Congo Basin Forests Partnership (CBFP), announces the publication of the new the "State of the Forests 2008". The report which comes after the "State of the Forests 2006" gives more insight into the forest ecosystems of the Congo Basin and highlights   the challenges to be faced in guaranteeing a sustainable and equitable management of these forests. The report equally takes a more targeted approach as it portrays intervention strategies as well as forest monitoring from the social, economic and ecological perpectives.

The "State of the Forests 2008" is a progress report on the condition of the Central African rainforests and covers all the Central Africa countries that are members of the CBFP namely: Gabon, the Republic of Congo, the Democratic Republic of Congo, Equatorial Guinea, Cameroon and Central African Republic. The report is divided into three major sections: national and regional syntheses; cross-cutting chapters outlining the environmental services provided by the forests; and chapters providing detailed information on the forest landscapes.

The official launching ceremony took place during the meeting of CEEAC-COMIFAC Ministers that was held from September 14-15, 2009 in Kinshasa - DR Congo.