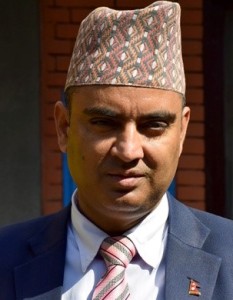 Bonn, Germany (March 17, 2016) — Naresh Sharma, of Nepal, was elected as the new Chair of the Adaptation Fund Board at the onset of its biannual meeting taking place in Bonn March 17-18.

Sharma, who has represented Least Developed Countries (LDCs) as a Board member since 2015, was nominated by the Asia-Pacific constituency to serve as the next Chair at the Board’s last meeting in October. He assumes the reins from previous Chair Hans Olav Ibrekk, of Norway, who completed his one-year term. The Chair seat rotates between developed and developing country members each year. Developing country regions also alternate, with Asia-Pacific up this year.

Born in Kathmandu, Sharma obtained a Master’s in Environmental Science in New Delhi before joining Nepal’s government service in 1997 – where he continues to work today. He has worked for the Ministries of Agriculture Development and Population and Environment as an agricultural market expert, agricultural officer, planning and monitoring officer and currently as Climate Finance Management Chief institutionalizing environment and climate change activities. He has promoted clean development mechanism projects and further serves as National Program Manager for Nepal’s Climate Change Support Program to expedite the Local Adaptation Plan for Action across the country, while attending numerous COP sessions.

The Adaptation Fund interviewed Mr. Sharma last month to gain his insights and vision for the Fund and its momentum going forward in view of the COP21 Paris Agreement adopted in December.

What have you liked most about serving on the Adaptation Fund Board and how will you apply your Board, country and professional experience to the Chair position?

“The Adaptation Fund is one of the most innovative and pioneering funds in addressing climate change adaptation in developing countries. It generates innovative ideas and experiences from all around the world to support adaptation actions in climate-vulnerable communities. It is an enriching experience to participate, listen and discuss individual projects before a funding decision can be made. This Fund not only finances projects, but also looks into building institutional and national capacity in developing countries. The Adaptation Fund has not only evolved through a rigorous learning process, but also been a strong inspiration to shape the newly created Green Climate Fund. It is an honor to be a part of and serve this Fund.”

“I have been thoroughly engaged in the formulation of a national climate change policy process in my country and in the design of its National Adaptation Program of Action (a process established by the UN Framework Convention on Climate Change for least developed countries to identify priority activities that respond to their urgent and immediate climate adaptation needs). Recently, I have initiated the process to prepare the National Adaptation Plans to address the medium and long-term adaptation needs of the country. The insightful knowledge I receive from the Adaptation Fund Board discussions immensely helps me to support local adaptation actions. I am also responsible for implementation of a national project called Local Adaptation Plan of Action, which Nepal pioneered and is a good case for many other countries to learn from. My experience from the national level adaptation work can be of help to guide the Fund during my term as the chair and also take the learning the Fund offers to the national level in Nepal. This is a two-way process for me to contribute nationally and internationally.“