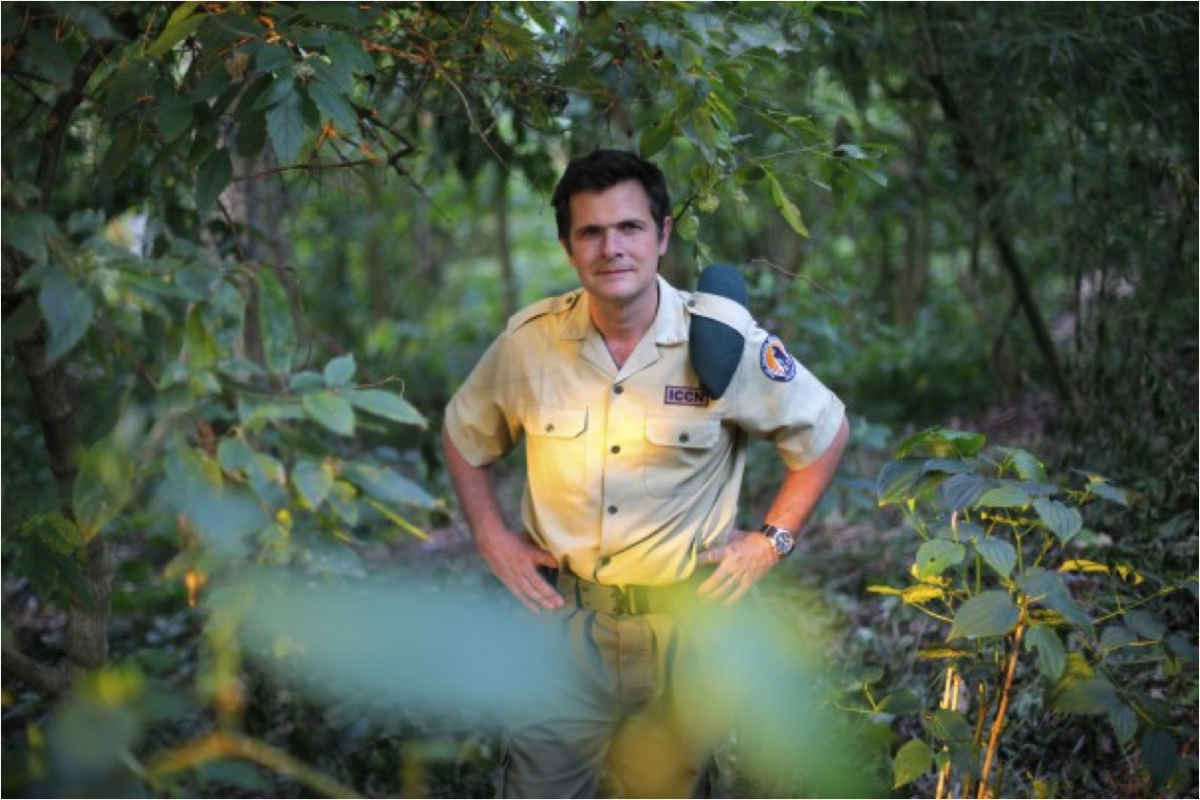 As filmmaker Orlando von Einsiedel arrived in New York recently for the debut of Virunga, his new feature-length documentary, he turned on his phone to a slew of urgent messages. Seven thousand miles away, in the war-ravaged Democratic Republic of the Congo (DRC), unknown gunmen had ambushed and shot one of the film's main characters. (See "Chief Warden Shot in Africa's Oldest National Park.")

For the previous two years, von Einsiedel had followed Emmanuel de Merode, the Belgian chief warden of Virunga National Park, as he and his team of 680 rangers confronted a complex web of threats and challenges: a brutal rebel insurgency, gangs of poachers, and a British oil and gas firm, Soco International, conducting exploratory studies inside the park.

Now de Merode, a man with many enemies, was in a Nairobi hospital with bullet wounds to the legs and chest.

In a phone interview from New York, von Einsiedel said the shooting is emblematic of the difficulties faced by all of Virunga's caretakers. He applauded the rangers' courage and willingness to risk their lives to ensure that Africa's oldest and most biodiverse national park is preserved, and he expressed confidence they would succeed.

National Geographic spoke with him about his film and the situation in the park.

Tell me how the idea to do a story on Virunga came about. Did you have any idea you'd end up shooting in the midst of a rebellion?

[Laughs.] I'd made a lot of films that were positive stories from places that maybe you don't hear that much positivity from. And I stumbled on a story about rangers rescuing a baby mountain gorilla. I did a bit of further reading, and I knew that eastern Congo was going through a period of relative peace, and I thought the park story was a metaphor for what was going on in the wider region. I thought this was a really amazing, positive story of inspirational rangers.

So I packed my bags and went out, and within about three weeks of being there, the new M23 rebellion happened, and very quickly I was making a very different film.

Was there ever a point, because of the resumption of war, that you considered abandoning the project?

No, because the moment that all started, we ended up being trapped in the park for a number of weeks. And as unpleasant as it all was, the rangers have been going through this for a long time. They expect the ultimate sacrifice to protect Virunga, because they realize how important the park can be for the future of the region. And that to me is such an inspiring story that, no matter how dark moments got, it always gave you the kind of energy and inspiration to carry on.

What was your reaction when you learned that Emmanuel de Merode had been shot?

I had that sinking feeling [you get] when people say, "Call me; it's urgent." Everyone was incredibly worried. Thankfully, Emmanuel is okay. This has highlighted just how dangerous the work is that the rangers do—140 of them have died in the past 15 years.

How has the attack affected the reception of the film in New York?

Much of your film focuses on Soco's preliminary studies inside the park [which have been authorized by the DRC government under an exemption to existing law]. Why do the park's stewards see this as such a threat?

I think there are several issues. Our investigation brings up very real concerns about bribery and corruption, about human rights abuses, and about links with armed groups.

[Editor's note: Soco has said the film contains allegations that are "unfounded and inaccurate" and that no drilling has been planned "or is warranted at this stage." The company said it "operates under a strict Code of Business Conduct and Ethics," and any reported breach "will always be investigated to the furthest extent possible."]

In its official response to the film, Soco maintains that it will never seek to operate in areas of the park that include the mountain gorilla habitat, the Virunga volcanoes, or the Virunga equatorial forest.

Yeah, that's true. The concession that they have doesn't go into the gorilla area. But I think it's also a moot point. [You can't] separate the survival of the gorillas from what happens 30 kilometers away in another part of the park. It's an ecosystem. So if an enormous area of the park is suddenly cut off for oil to be exploited, I think it's completely wrong for Soco to say it will never affect the gorillas. I mean, it's just crazy. Of course it will. Massively.

Your film documents Soco associates or their supporters attempting to bribe Virunga park officials. According to Soco, such acts "have never been nor will [they] ever be sanctioned by" the company itself.

The point is, in an area with a security situation as fragile as eastern Congo, they have a duty to be very aware of everyone who's working with them, or in any way tied to them, so that this doesn't happen.