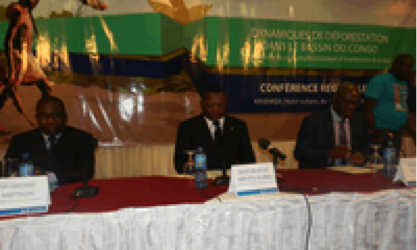 Kinshasa (DRC), 16-17 May 2013 – A sub regional conference entitled „ Deforestation trends in the Congo Basin: Reconciling economic growth and forest protection“. The conference was organized by COMIFAC‘s Executive Secretariat and the World Bank, and the  opening ceremony  was chaired by His Excellency Daniel MUKOKO SAMBA, the Vice-Prime Minister of the Democratic Republic of Congo. The meeting attracted 200 participants including policy-makers, experts, private sector and civil society representatives.

The main aim of the conference was to inform policy-makers on the potential impacts of the development of some key economic sectors on economic growth in Congo basin countries and possible trade-offs that could be considered to match the critical need for economic growth with forest ecosystem conservation efforts. The meeting served as a forum to present policy findings of the study, both its analytical component (sector by sector and modeling) as well as sector-specific and cross-cutting recommendations. 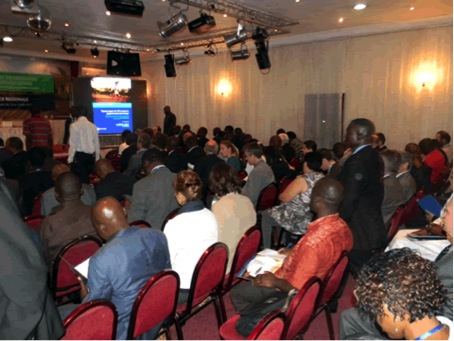 The conference was held against the background of an ambitious study on „Deforestation trends in the Congo Basin: reconciling economic growth and forest protection“which was launched by COMIFAC in 2009, in collaboration with the World Bank, to bolster understanding of future drivers of deforestation and forest degradation. The study aimed to carry out an in-depth analysis of key sectors which could substantially impact on deforestation and forest degradation, namely agriculture, transport infrastructure, power, forest logging and mining operations. The methodology adopted for the study was a combination of the following elements: use and adaptation of an economic model (GLOBIOM), in-depth analysis of abovementioned key sectors and consultation with sub regional experts during sub regional workshops.

Below are a few presentations which were discussed at the conference: