Pointe Noire (Republic of Congo), March 18 - 19th, 2010 - was held the 1st meeting of the regional technical Committee of the Mayombe Forest Transboundary Initiative, organized by the three signatories' countries to "Tripartite agreement of Mayombe", with the facilitation of the United Nations Environment Programme (UNEP) and The Central and West Africa Program (PACO) of the International Union for Conservation of Nature (IUCN).

Countries Representatives (Angola, Congo, DRC), partners of the Mayombe project (COMIFAC, RAPAC, UNESCO), the regional coordinator and project components chiefs, UNEP and IUCN-PACO representatives took an active part in the sessions. This 1st meeting gave the opportunity to examine the progress of the Mayombe transboundary forest project and to impel new dynamics for its implementation.

At the end of the session, participants made general and specific recommendations to the Coordination, chiefs of components, States, IUCN and UNEP Facilitation. They agreed on two stages procedures for continuation of the Mayombe Forest Transboundary Initiative: (1) the finalization of the project action plan by the coordination and chiefs of components; (2) the programming of the 2nd meeting of the regional technical committee in Pointe Noire (Republic of Congo), two days before the ministerial meeting (mid-May 2010...)

For more information, please download the Final Communiqué of the 1st meeting of the regional technical Committee (French version)

The Mayombe forest shelters a great faunal biodiversity with strong concentration of primates, distributed on three protected areas including: the reserve of Luki in Democratic republic of Congo (DRC), the reserve of Dimonika in Congo and the zone of Cacongo in Angola. It is also made up of a strong floristic biodiversity, fuel wood and other products. 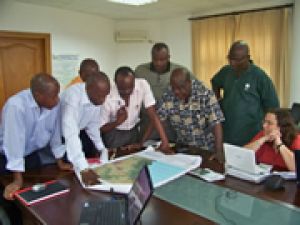